Oscar Foulkes May 9, 2016 Uncategorized No comments
Here’s an insight that came to me during AfrikaBurn, which I attended for the third time this year. Apart from the visual spectacle, and otherworld experience, I find it to be a deeply emotional space. Each year is different.

This time, because of lingering pain, as well as generally depleted energy levels, I took it easy, not venturing out to the burns until the last night. I have written before about the apparent lunacy of spending weeks building magnificent, artistic structures. And then burning them.

Those nighttime burns, especially the silent ones, are an awe-inspiring spectacle. It’s easy to enter a contemplative as you stand around a massive burn with thousands of other people.

My contemplation during the last night’s silent burn is that we carry a lot of shit around with us. Experiences become memories, which have emotions attached to them. Some of these are happy ones, but we are often just as likely to carry around feelings that either taint our relationships, or limit what we achieve.

There no value in hoarding shit. It’s bad for us.

Fire can be an important part of renewal; take all those limiting attitudes/beliefs/emotions and burn that shit. 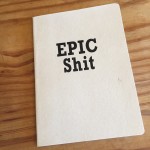 I was given this notebook by a friend, at the conclusion of a six-week course of radiotherapy to my throat. Radiotherapy is targeted at specific areas, so it’s theoretically an easier experience than chemotherapy. However, my throat became extremely painful, which affected eating and drinking, speech and more. I’m a better ‘writer’ on keyboard than with pen in hand, so here goes with a selection of things I would have written in the notebook if I could.