The Making of a Logo

Oscar Foulkes July 16, 2018 Adventures of Re- No comments
My spontaneous middle of the night brainstorming session that led to Hx: The Human Experience went down a variety of paths. One of the most important, though, was the symbol that would represent the business. In other words, the logo.

Logos are important, primarily as an easy way to uniquely identify the brand. However, really great logos perform a dual role of telling your story.

My nocturnal thinking started at UX (user experience) and ended up at HX (human experience). Along the way, I got thinking about the Rx symbol that is used for medical prescriptions. I liked the old-school apothecary angle to it (Rx actually denotes a recipe that needs to be followed for the formulation), with a hint of alchemy.

That incorporated part of the brief to Nic Jooste, the designer with whom I’ve worked for about 20 years. The one non-negotiable was that the ‘x’ had to be small.

Nic then did a whole bunch of representations of Hx. What I learnt from this exercise is that the letter X is visually dominant. There are also a bunch of other associations that I wasn’t looking for (e.g. XGames, Xbox etc).

The letter H is also a tricky one, in that one runs the risk of looking like a knock-off of either H&M or Hamleys. The one famous ‘H franchise’ we were safe from mimicking was Harry Potter.

H and X are two letters comprising straight lines with hard edges. Some of the explorations tended to the somewhat impersonal and corporate. I also asked him to do some handwritten options, but these (with x adjacent) had many ‘up-strokes’ that tended to the slightly histrionic. Also, the vertical lines on the H didn’t line up at the bottom (I can be a little OCD sometimes).

However, there was an H that I really liked. It stood strong and bold, with a rounded top left corner that gave it a slight quirk and softened it just a bit (interestingly, rounding more of the corners on the H killed the effect). There were various looser representations of X, including one that was in the vein of Japanese brush strokes.

I asked Nic to put them together, which may not exactly qualify me for inclusion in Clients From Hell, but could have caused some irritation.

The end result has a duality that acknowledges the complexity of humanness. The H represents the hard sciences, the left brain, the numbers and spreadsheets that are integral to business. On the other hand, the brush-stroked X speaks for art, contemplation, beauty, and the human touch. Orange has a sense of fun and playfulness. 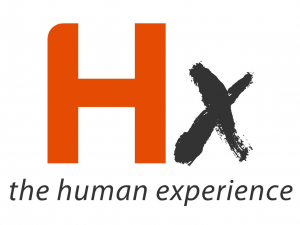