Oscar Foulkes February 5, 2020 Horse Racing No comments
This was my (unsuccessful) entry in the LQP Writers’ Contest.

I attended my first Queen’s Plate in 1984. Wolf Power was the winner, ridden by Jeff Lloyd. His sensational run of form over a magical 18-month period left the kind of impression that is unique to young people seeing their first champion. I can’t think of Wolf Power without imagining The Guv on his back, Lloyd’s extra-short stirrups thrusting his body into a pose matching that of an inverted isosceles triangle. His ‘look’ on the back of a horse was different to that of any other jockey.

Charles Faull’s iconic canter past picture of Wolf Power prior to the 1984 Queen’s Plate is a study in grey, black and white, with further grey provided by the smoke backdrop.

It seems appropriate, then, that a grass fire downwind of Kenilworth had sent thick clouds of smoke across the racetrack as we awaited the start of the 2020 L’Ormarins Queen’s Plate. My racing companion was my daughter, having her first LQP experience. My son had been with me the day before, also making his LQP debut.

There is a great deal of information for racing ‘newbies’ to absorb; far more than can be shared in one afternoon (not that my children are newbies in the same sense as the LQP party goers). I started by explaining the significance of this as the country’s most important 1600m race, because of the weight-for-age (WFA) conditions, as well as its long and proud history.

I then told them that their grandmother had bred the winner three times, twice with Winter Solstice, and then his close relative Mother Russia. My mother’s second cousin, Dan de Wet, bred Pocket Power, which meant that there was an unbroken seven-year sequence of LQP winners from the de Wet family.

You have to go back to 1951 to find another individual woman (i.e. not a de facto inclusion as part of a marital partnership) to have bred a winner, in the form of Peggy Kelly, the registered breeder of Black Cap. While those circumstances are unknown to me, the expectation is that Ms Kelly’s role wasn’t quite as hands-on – or riven with risk – as that of Veronica Foulkes.

My mother didn’t need to look far for female role models. Her own mother, Margaret de Wet was an inspiration.

When her husband, Oscar de Wet, died early in their marriage, my maternal grandmother took over the running of the family farm, Excelsior. Keeping with this essay’s theme of timely connection between past and present, the current issue of Farmer’s Weekly has an archive section in which they’ve reproduced an article about my grandmother that was first published in 1964. Woman farmers were scarcer than hen’s teeth in those days, and magazine articles about them fewer still. The discovery of this article brought my extended family to a reverent standstill.

When I was born (on my mother’s 21st birthday), my mother forever tied me to de Wet heritage by making it my second name. It’s become easier to make my initials “OD” or “ODW”, but the NHRA has stuck with the more correct “O de W”.

The de Wet family settled in Ashton in 1869, when my great great grandfather, Koos, purchased a large tract of land after eloping with his brother’s fiancée. In 1878, he bought the stallion Octavius Caesar from the stud of Queen Victoria (I haven’t been able to establish what impact his progeny had on the race that owes its genesis – and name – to this monarch).

The original farm was split between Koos’ three sons, into entities that still exist – Zandvliet, Prospect (divided once more) and Excelsior. All three were important studs at various periods in the 20th century.

Returning to the LQP Festival, my grandfather, Oscar de Wet, bred the winner of the second and third runnings of the Paddock Stakes, in the form of Country Cousin. At stud she produced the Sceptre Stakes winner, Tabor.

Looking back over the list of breeders with winners in the races that comprise the LQP Festival, primarily the Queen’s Plate, it’s striking how few have retained any kind of continuity. Most of them are no longer in operation. The line from Koos de Wet to Veronica Foulkes is admittedly not a direct one in a patriarchal sense, but it feels significant that it comes at the end of an unbroken 150-year heritage of breeding Thoroughbreds. Unless one of my children or nephews gets involved, I’m the last man standing.


It’s the final third of this history that obviously is most real to me, because these are filled with the broodmares and their descendants that I’ve been around since I was a little boy. Perhaps the most important of these – in a L’Ormarins Queen’s Plate context – was the mare Terpsichore, in that two of her daughters produced Queen’s Plate winners. To date, this is the only family to have produced multiple winners.

Breeding operations generally close down when a stud has had a run of bad stallions. This was especially true of Karoo studs, where it was not practical to send mares to outside stallions. The second reason internal to the stud is the degree of interest from the owner and future generations. Finally, there is the critically important external factor: commercial viability.

Racing faces tough times, partly due to the dire state of the South African economy, but mostly thanks to racing’s inability to hold onto its existing customer base, let alone grow it.

The LQP Festival plays a vital leadership role in the process of reversing decades of complacency if not outright incompetence. For those of us who are invested in the future of this great sport, blue and white are the colours of hope.

Every aspect of the event is managed with minute attention to detail and deep levels of care. It has been grown conservatively, getting just a little bit bigger every year, set against the best racing it is possible to assemble, on the country’s fairest racecourse (in both senses of the word). Of course there is glamour, fashion, celebrity and an after party, because racing is in a unique position to deliver those things. The core product – the horse/racing – delivers an immediate rush from up close, but is admittedly a longer, more complex journey, as it engages both mind and feeling.

At the moment, the direst of predictions might not see racing surviving another ten years, let alone have its future mirror the long history of many of the sport’s professionals.

It is up to my children to choose their fields of study, and ultimately the kind of work they’ll do, presumably in vibrant industries. I’m not going to push them into any direction. However, I owe it to them to share the things that are important to me, especially the ones I feel in the pit of my stomach. Thoroughbred racing and breeding is one of those.

I could wax lyrical about horses’ beauty, the power of them at gallop, the liberation of being on horseback, the wonderful experience of being surrounded by a group of inquisitive yearlings in a paddock, the hopes and dreams that plot the route back from disappointments, or the many hours of planning that precede bloodstock decisions. The fact is that all of the above is simply something I feel. And it’s good.

Over 1600m, the drag effect of weight is two pounds per length. It’s a handy entry point for making handicapping calculations over all other distances, by making a pro rata adjustment. Furthermore, handicapping is incomplete without an understanding of WFA. Could the WFA 1600m L’Ormarins Queen’s Plate also be an entry point for a broader reinvigoration of our sport? I do hope so.

The race’s record also happens to be a hook on which one can hang just about any story about the greatest of our jockeys, trainers, racehorses, stallions, broodmares and breeders, not to mention the owners that paid the bills. Eventually, all those stories intersect with the Queen’s Plate.

Smoke and fire have an obvious connection. I am willing a blue and white feathered phoenix to rise from those ashes. 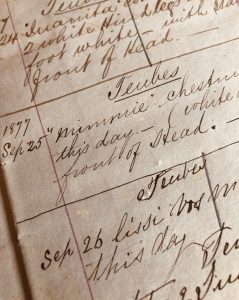 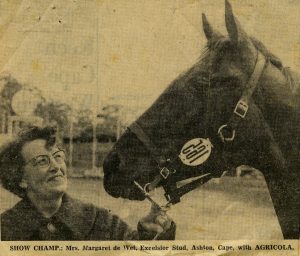 My grandmother in 1964, with her trophy-winning yearling, Agricola.