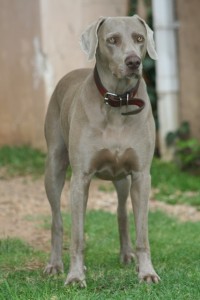 Genetics, especially as applied to the breeding of the swiftest racehorses, is a subject that occupied a great deal of my brain space until wine started taking over (that would be the subject, not the substance, although I wouldn’t deny its daily effect).

The moment when chromosomes match up can be something of a lottery, but the overall characteristics of the breed are generally respected. So, while it was possible for humans to reach a point of having created the Thoroughbred (the official designation for racehorses), we have very little certainty that the match between sire and dam will produce an animal capable of winning major races. Indeed, examples abound of full-brothers and full-sisters to great champions who couldn’t get out of their own way.

Pedigreed dogs have gone through pretty much the same process, except that breed standards are aesthetic ones, as defined by humans. The kind of performance testing that has shaped the Thoroughbred doesn’t exist for most dogs. Perhaps I’m just expressing the arrogance of one breeder over another, but I’d have to regard the process that gave us Pocket Power, Rachel Alexandra or Zenyatta as being superior to the one that produced our three Weimaraners. 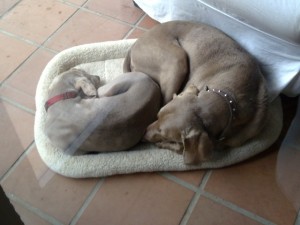 Partners in crime - Kai and Oliver

The history of these things can get manipulated with time, but the gist of it is that this breed originated as hunting dogs for the Weimar nobility. I can attest to their instinct in this regard, having witnessed successful capture of squirrels and various birds – including a swallow on the wing. In fact, any smallish fluffy creature can incite their hunting nature, which is a problem when the unsuspecting owner of a toy pom has decided to take her little pet to the park at the same time as we’ve been there with Psycho Sam (one of our previous Weimaraners).

Given my racing background I can also appreciate their athletic ability, which they are able to deploy as successfully on the flat as they do up and down a 45-degree forested slope.

Weimaraners are also very affectionate dogs. According to the Wikipedia entry they have always shared the family’s living space, so are prone to separation anxiety. I’d have to say I’ve seen that in action as well.

Another feature about which there is no argument is their beauty, to which their athleticism surely contributes. I hope I’m not about to offend someone, but I believe that a significant number of people who own Weimaraners do so because their neutral warm grey colour fits in with most homes’ interior decoration.

It’s now time to introduce you to each of our hounds, which will reveal a little more about this man-made breed.

Gadget is the bitch, sometimes in more ways than gender alone. She is the oldest, the most intelligent, but also has the least characteristic body shape, in that she’s more stubby than sleek. We’ve had our moments with her, although in comparison with the dogs that have come after her she’s an angel.

Psycho Sam was good-looking trailer park trash; his maternal and paternal grandsire (assuming the term can be applied to doggy genealogy) were the same dog. While his end was sad, in that he was poisoned, it was certainly for the better.

Kai came to us because his owner had relocated to a smaller property (space and exercise are very important for Weimaraners). He’s the soppiest, most friendly creature. His vice is that he cannot resist a gap in a fence, especially on Sunday nights if our neighbours have already put out their garbage for Monday morning collection. The first time he went scavenging he came home with a 15 cm gash on his side, which he sustained in squeezing through the abovementioned aperture. The resulting vet’s bills were such that it would have been cheaper for us to take him to dinner at The Fat Duck or El Bulli. Despite his distress, he subsequently caused himself similar injuries on a future occasion. Kai has demonstrated a pea-sized brain, which matches the size of his bladder (judged by the number of times per night he wants to be let out).

Oliver, the pup, is currently the bane of my life. Despite a couple of bites from Gadget (if I had teeth like hers there are times I, too, would have bitten him) he’s going to grow up into a beautiful dog. If only he could spell, Ollie would put the ‘R’ into retarded, giving us a hat trick of desperately unintelligent male Weimaraners. His penchant is the destruction of Havaianas and Victoria’s Secret bras (when it comes to apparel he’s clearly brand conscious). Any food in reach of a dog on hind legs is not safe when he’s around. And, we’re looking forward to the point when he’s house trained because we don’t much enjoy the experience of stepping in puddles, of either sort, when on our way to the bathroom in the middle of the night.

Despite their absence of grey matter (not Gadget so much), our dogs know when it’s a Saturday or Sunday. They follow me around the house, fixing me with a gaze that says “do it now, come on!”. From the moment I start pulling on my cycling shorts they are in a state of high excitement (sometimes I have to make a visit to the toilet after getting changed, which confuses the hell out of them).

A good Sunday morning mountain bike ride takes us to the King’s Blockhouse and back – a distance of about 17 km, including some serious uphills, which is a lot for a dog on foot. Gadget is getting a bit arthritic, so she struggles to keep up on the downhills, forcing me to go back for her, which gives me a longer ride.

At the same time as defining aesthetic standards, it would seem, humans have also done a successful job of breeding canine companions. Dogs – of any breed – are bred to be man’s best friend. I can moan about stupidity and sundry other irritations, but I cannot fault our dogs’ affection or loyalty.

While the performance test for dogs may not be the same as the Epsom Derby, it happens in millions of homes around the world every day.

Lovely piece of writing Oscar. As I’m besotted with dogs, paint them, and fancy myself as a bit of a canine behaviourist too, it was particularly interesting. I read everything I can about any and all breeds.
Poor Psycho Sam – what a dreadful end. Who would have done that and why?
Here’s a quote from William Wegman who famously photographs Weimaraners:
” My Weimaraners are perfect fashion models. Their elegant, slinky forms are covered in gray- and gray, everyone knows, goes with anything.”
Check out his dog portraits – they’re worth having a look at.