Oscar Foulkes November 7, 2016 Cape Epic 2 comments
A few things changed this week, and not all of them were obvious or tangible.

In preparation for receiving my Epic bike, I did a custom fit with Dave George at The Gear Change. This is possibly the most illuminating cycling experience I’ve ever had. I discovered that I was not only sitting too far forward on the saddle, but that my weight was also unevenly distributed. Using this information, he was able to put me on the saddle that best suited my body. He also shortened my cranks. Video evidence showed that I was not as still in the saddle as I thought (more core exercises required). My riding life has been based on seeing bike setup as being nothing more than having the saddle at the correct height. How wrong I was.

If you do anything more than a casual pedal around the village once in a while, a custom fit is one of the best things you can do for yourself. Apart from comfort and performance, it could even prevent injury.

As a former specialist retailer, I can totally connect to the kind of service delivered by people who are passionate about their product, and who will go to extreme lengths to ensure that their customers are nothing less than delighted. This is the experience I’ve had at The Gear Change, thanks to Dave and Justin.

I rode day one of Wines2Whales on a brand new Trek Topfuel 9.8 that had been assembled the afternoon before. The furthest it had ever been ridden was when I pedalled it to the start!

Putting me on a demo Trek when they had been let down by the Yeti supplier was just one of many instances of The Gear Change ‘going the extra mile’. I loved the miles I did on the Topfuel. It’s light, and copes very well with uphill or downhill technical trails. My riding partner had the use of it on day two, and was similarly impressed.

On day two, I once again rode a brand new bike that had been assembled the day before, which might be something of a first for a weekend warrior doing a stage race. This was the much-anticipated new Yeti ASR, with Eagle XO1 groupset. In my opinion, its 1×12 configuration is as much of a game changer as the shift from 26 to 29 inch wheels. I was able to spin up hills when I needed to, and had plenty of gears on the flat or downhill. Changing gears was a barely perceptible click.


I wish I could say the same about my breathing, which was so loud that my partner didn’t need to look around to check if I was on his back wheel (true story). However, compared with riding Imana early in August, the wheezing didn’t kick in as early on each stage.

The Yeti is a fantastic bike. It climbs like a champ, and speeds comfortably down gnarly descents. On uphill single track, it also gave me the impression that I had a few extra moments to plot my route or to change to a different line.

As you can imagine, day two, the ‘play day’ of Wines2Whales, was a heap of fun on the Yeti.

The hard work, or slog, of day three is the middle section, from Bot River to the dam at the top of Hemel en Aarde. The rest is mostly downhill, either in the form of single track or the gnarly descent on Katpas. The Yeti loved it all.

The conditions were pretty close to perfect, and I was on this amazing bike, but I was nevertheless delighted to record my fastest-ever day three for Wines2Whales. Perhaps the training is starting to push back the effects of my treatment.

Allowing for route changes on days one and two, it was my fastest Wines2Whales ever, which was certainly assisted by me trying to hang onto my first two days’ partner, Brevan, and then Epic partner, Piet, who joined me with fresh legs for day three. Both were admirably patient.

‘Process’ (i.e. training programme), along with great equipment, has got me to a place where the results appear to be showing improvement on what I’ve done before. The improvement is also bringing the next level of performance into reach, in a way that makes it feel achievable.

An average Cape Epic day is at least 50% longer than Wines2Whales (with as much additional climbing), and it’s seven days rather than three (ok, technically eight, including the Prologue). There is still a lot of work to be done, but I continue the journey from a happy place. 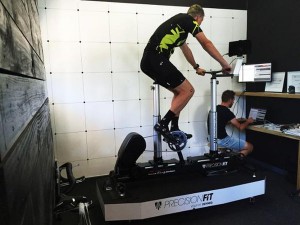 A custom fit in progress at The Gear Change

Believe, or not, but there’s a bunch of additional technical (i.e. anorak-type stuff) that I left out.
🙂