Oscar Foulkes February 13, 2017 Cape Epic No comments
I think I may be on record as saying that the world would be in better shape if we all ate more chickpeas, rather than the vast quantities of industrially produced animal protein we get through. That’s the theory. In practice – especially if one is on a training programme – it takes careful planning to ensure that one gets sufficient nutrition.

I know this because my family declared this a vegetarian week. I can’t recall ever being as ravenously hungry. I thought that our dinners were quite well put together (not to mention delicious), and I had eggs for breakfast on most days, but that still left me nutritionally short.

I admit to ‘cheating’, in that my lunches were not vegetarian, because I could see myself getting into all kinds of trouble on Tankwa weekend if I went into it underfed.

For vegans who train on this level, big respect, I truly don’t know how you do it. I craved cheese every day this week.

The week brought an additional bit of novelty, in that Piet took me to Concept Studio for a Watt Bike session on Monday morning. That’s good training, although I suspect that the final five weeks before Epic don’t leave much time to get the benefit of it.

In the final kilometres of the previous week’s race, Piet cracked a rim. It turned out that I had also cracked a rim, which made it a perfect pair for me, because I’d discovered a blemish on my front rim. Whereas Piet had a hugely frustrating time getting the correct replacement rim, by contrast I had a fantastic service experience. Within an hour of The Gear Change calling South (the Stellenbosch-based manufacturer of my rims), Nico was at the store with a spare set of wheels.

Mountain biking stage races have become something of a boom industry, with events like Wines2Whales selling out in minutes. I’m not going to say that the races have been dumbed down, but the organisers have certainly been mindful of reducing the metres climbed to a level that will keep the event interesting for strong riders, at the same time as attracting the more social component.

Tankwa Trek is not one of those. At the first meal, as I looked around at the riders, the majority of them sporting “a lean and hungry look”, I knew that Tankwa Trek is a different kind of race. In just five years it has grown tenfold, on the premise that it is both physically and technically challenging. It’s become a popular event for Cape Epic preparation, or for riders wanting more of a challenge. From a purely mountain biking perspective, its trails are fantastic. There was no shortage of pain this weekend, but I’ve rarely had as much fun riding singletrack.

Day One’s 90km with 2000m of climbing was undertaken in a heat wave. The maximum temperature I saw on my Garmin was 44 degrees, which explains why 70 riders did not complete the first day. The climbs were brutal, but we were rewarded with some sensational descents. This day was about survival.

Day Two was a similar distance, except that the climbing got tuned up a notch, to 2200m. To put that into perspective, it’s more than double the height of Table Mountain, measured from sea level. The central part of the day is the climb from the Ceres valley floor, up the Merino Monster in an almost unbroken ascent of over 1000m.


The pictures alongside give a tiny indication, although one needs to stand up there on the mountaintop to fully appreciate the scale.

We finished Day Two strong, in a time that was more than half an hour faster than Day One, despite the additional climbing.

By comparison, Day Three looked like it would be a breeze, in that there’s just 1200m of climbing. The difference is that the first 32km was all on district road. Riding was fast and furious, with many riders’ inner roadie bursting forth. I was at the limit within minutes. Looking back on the data, my heart rate never spiked, but aerobically I was in trouble. Thanks to Piet’s hand on my back at critical stages on some of the small climbs I was able to stay with a group, although I fell off the back of several of them. Then, with about 8km to go to the water point, he made a break for it with two other riders. I tried to stay with them, but blew up so badly that I couldn’t even stay with the group I’d just been with. Fortunately, another group came through soon after, so I was able to make my way back.

That high-speed section, during which he passed two more groups, was possibly just about the most fun Piet had on Tankwa. The man is a machine.

After leaving the water point, I mentioned to him that the 32km sprint had taken it out of me.

“That means you’re in the hurt box. It’s going to be a good day out.”

While the pressure didn’t let up when we entered the ‘broken’ part of the route, Piet played the part of the stronger partner, either riding ahead of me into the wind, or helping with a little push up the final bit of a climb.

I realise that Day Three is getting much more air time than the others, which isn’t a reflection of the quality of the trails on the other days, but this journey is as much an internal one as it is one that crosses the Western Cape’s biggest mountains.

With about 8km to the finish, Piet made a quick move past the group we’d followed down some singletrack. In retrospect, it was an extravagant use of energy, as I realised when it turned out that there was still a substantial amount of effort required to finish the stage.

My heart rate was well above 150 and my breath came in load roars. Having been in the hurt box all day, I scratched around it some more, finding four letters: H-T-F-U (a.k.a. Rule #5 – harden the fuck up).

The next week will be relatively easy, building up to riding the Knysna Bull at the end of the month. Piet has already announced that we’ll be riding the approximately 20km to the start of each day’s roughly 60km stage. Did I mention that this pre-stage ride includes the climb out of Knysna? 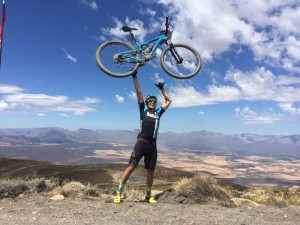 A #TankwaLift on top of the Merino Monster (pic: Craig Kolesky) 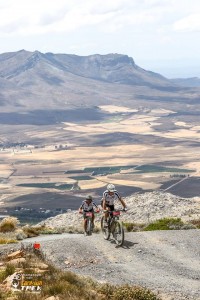 There are some very steep sections to the climb up Merino. We started the climb on the valley floor in the distant background (Pic: Oakpics)