Oscar Foulkes December 19, 2016 Cape Epic No comments
My Cape Epic training programme – as it is for every other rider – is a tangible, daily connection with the event. However, other than watching Epic videos on YouTube, or going onto the Epic website, that’s as close it’s going to get until registration on 18 March.

Over the long weekend, and extending to Monday, I attended the Daisyway Cape Epic Boot Camp, which got 30-odd riders up close and personal with some of the biggest mountains we’re likely to ride on and over. Apart from the technical stuff we learnt, it was great to connect with other people who are on the same journey.

I have referred to the need for the 50% extra distance and climbing involved in Cape Epic stages to become the new normal. The activities this weekend opened the door to that, by enabling us to experience elements of Cape Epic in bite-sized pieces.

We rode in Caledon, Greyton and Grabouw, guided by Daisyway’s expert riders and selected affiliates, with mechanical guidance from Erica’s husband Spook (and 12-year-old son Tim). I truly couldn’t recommend them highly enough for riders at all levels of commitment to mountain biking.

While on the subject of recommendations, we stayed at Trail’s End Bike Hotel, which was a great base for our training activities.

We had some fun on singletrack sections, but my highlight was the ride up Groenlandberg. When we started the approach, we had already climbed 400m in the first 14km of the day’s riding. The actual Groenlandberg climb was another 9.7km, with 570m in elevation gained, and the views from the top were nothing short of spectacular. Apart from the adjacent valleys (Elgin and Villiersdorp), we could see all the way to False Bay, as well as the ocean near Hermanus.

The descent from Groenlandberg is fast, with numerous rocky sections (perfect terrain for a Yeti, by the way), and a secondary climb that took us up another 300m.


The biggest thing I learnt this weekend was about pace, which you may have gathered has been a concern, particularly with respect to my breathing difficulties at elevated heart rates. Erica and her team kept stressing the need to take it easy, mostly riding in heart rate zones two and three. Everyone is different, but it seemed as if other riders were generally in zone two when I was in zone three. At this level my breathing is impaired, but not in the alarming way it is in zone four.

Piet and I rode the last two days with strict top-end limits to my heart rate, and found that we climbed fast enough. If that’s what it takes to finish Epic, I’ll take it. I was pleased to set my mind at rest on this subject.

“Conquering as one” is a major theme of Cape Epic. Yes, it’s about each rider’s internal battle, especially when mechanicals or extreme fatigue threaten to end the race. But it’s also about the partner.

Piet and my Epic journey nearly ended at lunch of the first day of the boot camp, when he had pre-ordered me a Caesar salad (imagine that after riding for six hours). It’s a nutrition fail on a par with him willfully pushing me off my bike. But then I had a wardrobe malfunction on day four, by wearing kit with the branding of one of his competitors. Our partnership survived both infractions.

He’s a stronger rider than I am, which is theoretically the incorrect balance. However, I think it’s been relevant to my recovery from radiotherapy that the gap is as big as it is. Perhaps, if I had a partner who is more evenly matched, I may not have made the same kind of effort. Regardless of the difference in strength and fitness, Piet has been nothing but supportive and encouraging.

Whatever happens from this point, I’ve returned from the boot camp feeling great. It’s a far cry from the weeks during and after my treatment. I am so very grateful to feel this way. 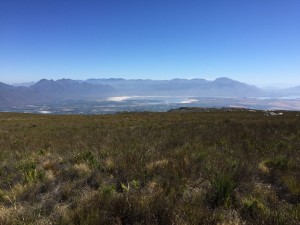