Oscar Foulkes December 11, 2017 Cape Epic No comments
Erica’s Epic Intervals were back on the programme this week. I had previously done them on the bike, but ran out of mountain, so it was interesting to do them on the Wattbike. Tuesday was a big, happy tick in the ‘done’ column. I felt strong.

Thursday was just a regular 90-minute ride, which I shifted to early Friday morning to avoid the heat wave. Before talking about the ride, I do need to mention that we rode Stage One of Epic 2017 in the same kind of heat. No wonder so many riders ended up in the Medics tent!

I duly set off at 6.00am on Friday morning, and purposely included a few sketchy descents. I’m enjoying exploring the Tallboy’s downhill capabilities, which are regularly producing new PRs when descending. Thankfully, I haven’t yet found myself in the situation of running out of talent.

Erica’s programme had the 112km Race2Nowhere down for Saturday, but I had commitments in Cape Town. The problem with not doing the race is that there was a gale force South-Easter blowing in Cape Town, so I couldn’t replicate the ride locally. It was of similar strength to the wind that caused the Cape Town Cycle Tour to be cancelled earlier this year.

The first climb out of Deer Park is a little bit sheltered from the wind, so I did a bunch of circuits (up from Deer Park, turn right on the road towards the Big Tree, then turn right again after a couple of hundred metres, which brings one back to the start of the climb). The entire circuit is about 1 km, with about 46 metres gained. One gets roughly three-and-a-half minutes of effort, with a minute-and-a-bit of recovery, so it makes a nice interval. Because this is my go-to wind route I’ve called them wind-ervals.

It was so windy on Saturday that the clouds were getting pushed far enough over into the City Bowl for a rainbow to be formed.

However, even an hour of these intervals didn’t make up for 112km under race conditions, so the plan was for Piet and I to do a long ride on Sunday morning. The wind had moderated overnight, but was still very strong.

Piet’s renowned stoicism doesn’t quite extend to training in the wind, so we headed to the gym for a Wattbike session. I’m very pleased we did, because I inadvertently learnt something. Well, I knew it already, but it was very clearly illustrated.


About 10 minutes into a Building Blocks session on the Wattbike app, I looked over to Piet’s phone. It wasn’t quite as furtive a glance as someone cribbing another’s exam paper, but this stuff is a little bit private (until it gets onto Strava, of course). The Velominati should have a rule about this. That would make it #96.

I decided to implement Rule #5 (HTFU), but then the required power jumped again, and I realised I was heading for trouble. I could match the power, but not for the full extent of the session.

I fiddled with the app settings, and started the session again. However, the damage had been done – I could turn the cranks at a reduced power level, but anything that required proper effort had me stumped. And that was all as a result of riding at too high a power output for 13 minutes. That is all it takes to ‘blow’.

There is such a thing as Epic pace. I can be thankful that my impaired breathing forced me to be conscious about riding at a moderate pace for much of the event.

I’ve received my training programme for the next month. There will be some interest this weekend, with the four-day Daisyway Boot Camp.

But then it changes – from 23 December to 7 January, I’ll be riding more than 1000km, most of which will be base training. This is not exactly the kind of riding that gives me opportunities for fun on the Tallboy. The Santa Cruz Stigmata, on the other hand, is perfect for that kind of thing.

There was a time when the drive to our holiday would involve me loading assorted kids’ bikes. This time there will be multiple bikes, but they’ll both be mine (i.e. road bike plus Tallboy). Given the amount of time I’ll be riding, followed by recovery on the couch, the concept of family holiday could end up being largely theoretical.

On the upside, I’ll be able to – or should I say, I’ll need to – spend many of my waking hours eating. That feels like holiday. 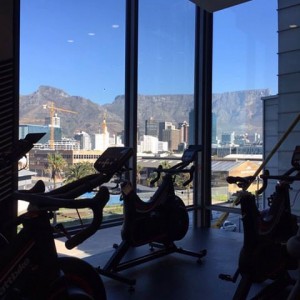 Please excuse the quality of this pic that I grabbed off the interwebs, but I wanted to illustrate the view one has when riding a Wattbike at the Virgin Active in the Silo District.