Oscar Foulkes February 12, 2018 Cape Epic 2 comments
For many, TankwaTrek is the final step in preparation for the Cape Epic. Certainly, one can’t just pitch up and ride it, as one might for Wines2Whales. Even walking through the race village, you know that it’s a different kind of race, because the majority of riders have the lean look of people who train hard.

Relegating this event to prep status, though, would be to denigrate its unique challenges. Yes, few people would be fit enough to ride TankwaTrek if they weren’t training for Epic, but it’s a race that is iconic in its own right (I encourage you to check out the pictures and videos on their Facebook page).

With the exception of the MTB trails at Houdenbek, and the odd bits of district road, none of the rest is publicly accessible. The many miles of single track wend their way between bushes, rocks, trees and whatever else the natural topography throws up. If any clearing or trail building has been done, it’s just the very basics required to enable bicycles to pass through. Nothing is manicured, the terrain tests strength, fitness and technical skills. And it tests bikes (more on that later).

In some parts, one is simply following the channels carved through rocks by millions of years of water flows.

Then there’s the climbing, much of which is on energy-sapping terrain. The iconic climb, on day two, is the Merino Monster. The total metres climbed from valley floor is more than 1000m, but the final 800m is at an average gradient of 10% (yes, average means that some parts are steeper than 10%). There’s no time for relaxing just because one has reached the summit (or “climax” as Mauritz Walters so hilariously described it during the race briefing) – the Merino descent is as much a test of technical skills as the ascent is of strength and fitness.


Having ridden TankwaTrek for the second time, I would ride it even if I weren’t doing Epic. If you love mountain biking, this is a must-do event.

When I rode it on a Yeti ASR in 2017, at no time did I feel as if I was bringing a knife to a gunfight. It’s more than enough bike for the job. What I got this time around from the Santa Cruz Tallboy is a bike that is rock solid on just about any descent. In fact, whenever I saw the ‘danger arrows’ (see pic alongside), they almost presented as flashing carnival lights, announcing fun and excitement.

Having built up TankwaTrek, it seems wrong to report on the event from the perspective of our Epic training. Piet had some trepidation, because much of his December and January training was focused on the 70.3 Ironman in East London, plus he was recovering from a cold. However, judging by the way he attacked the trails, you wouldn’t have known that. Piet is a very strong rider, regardless of the circumstances.

We completed 2018 TankwaTrek more than two hours faster than in 2017. It still puts us well down the field, but it was great to experience a tangible benefit of all the hours of training.

The biggest benefit, though, was being fit enough to enjoy the experience of riding three days of these unique trails. Some days are diamonds! 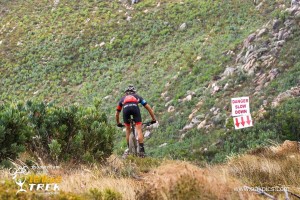 One should always employ caution when these signs appear on the trail, but they can also signal that extra fun lies ahead (depending upon technical skills and the bike one is riding).
(pic: Oakpics, courtesy of TankwaTrek)

Touché. Well said brotherman. Lekker to catch up on that massage table, sorry about the pained yelps!