Oscar Foulkes November 6, 2017 Cape Epic No comments
The talisman of our 2017 Cape Epic, and indeed our entire ‘team story’, is a racehorse by the name of Sergeant Hardy. To recap – he has a paralysed right vocal chord, which reduces the amount of air he can inhale. Following five surgeries on my vocal chords, as well as a six-week radiotherapy course, my breathing was also restricted.

The similarities end there, because my equine brother is not only seriously talented, but also much better looking.

Regardless of his physical handicap, he has claims to being the best sprinter of his generation. It is one of the great privileges of my life to be associated with so fine a racehorse, by virtue of my mother having bred him, and the two of us racing him together. He runs in her racing colours, which Piet and I adopted for our Epic kit.

He made his seasonal debut at Kenilworth on Tuesday, against a strong field of sprinters of various ages. In fact, it’s pretty much the same line-up that will contest the major sprint races this season. Despite this being a prep run and him not being fully wound-up, he stormed home under close to top weight. The fairy tale lives on.

Tuesday would usually be a training day. I did get home in time to jump on the bike, but I postponed to Wednesday morning. This was a hill session on the mountain, and then on Thursday I had another hill session (this time on the Wattbike).

Hills are basically about strength training, riding in a big gear at low RPM for six minutes at a time. This week involved five repeats per session.

Saturday’s ride was supposed to be three-and-a-half hours on the mountain, but Piet wanted to get in some training for the Double Century. So, we rode to Simonstown on the road. I tacked on the ride to meet him, plus getting home over Camps Bay drive, so ended up on close to four hours.


An 80km mountain ride was on the programme for Sunday. I rode with some mates as far as Tokai, following the trails above Kirstenbosch and then dipping to the Green Belt. They continued to Kalk Bay on the road, while I headed up to the Tokai trails. I mistimed my entry to the singletrack, and got stuck behind a large group of riders, many of whom were walking down the steep sections. As frustrating as this was, it was also satisfying to be able to compare with my former self. There was a time that I would also have been walking in some places.

Getting back was a slog. My legs were toast – the cumulative effect of a big week, as well as riding to Tokai into a headwind. Including a stop for buying and eating a sandwich in Tokai, the day ended up on five hours.

While on the subject of headwinds, I have an apprehension about Stage Three next year, in which we ride from Arabella to Worcester. If there’s a cold front coming in – and early ones are possible in late March – we’ll be riding into a headwind for pretty much all of the 122km.

Justin Snaith, who trains Sergeant Hardy, believes in having him super fit as a way of reducing the impact of his impaired breathing. As a big, strong horse, he is capable of doing a lot more than his more average stable mates.

I don’t have the same physical attributes as Sergeant Hardy, but Erica Green is following a similar strategy with my training programme. The fitter and stronger I am, the less I’m affected by reduced air intake.

We’ll have a new (still-to-be-decided) team name for 2018. Whatever we decide on, Sergeant Hardy remains a personal talisman. 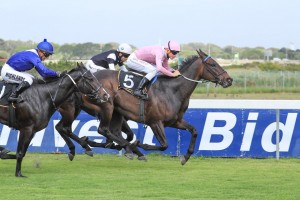 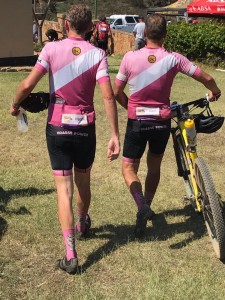 Our 2017 kit drew inspiration from my mother’s racing colours.