Oscar Foulkes March 11, 2018 Cape Epic No comments
I ended last week’s training report with a comment about getting bike and body to the start of Cape Epic in good mechanical working order. The body reference came about because I’d been battling discomfort/pain in lower back and right hip, which I assumed would get fixed by a visit to Rob Beffa, along with a follow-up massage.

I did, indeed, feel much better on Tuesday night. The relief of having ease of movement was immense.

On Wednesday, Piet and I rode the Prologue route with Jeroen Hirdes, who had arrived from Amsterdam that morning to start his acclimatisation for Cape Epic. I stopped a few times to stretch my lower back, which was a concern.

I had a follow up appointment with Rob on Friday afternoon, by which point I had major doubts about even getting to the start line. Any movement was seriously uncomfortable.

He needled many muscles in my right leg, all the way up to the glute area, after which I had another massage. By the evening, I wasn’t feeling much better. Depression grew, almost to the point of tears at the thought that the hundreds of hours of preparation and training were about to be flushed down the tubes (metaphorically, of course, because there’s no water to flush anything in Cape Town at the moment).


I called off riding the Cape Town Cycle Tour, and lined up an easy ride on the road for Saturday morning, which did wonders for my mood – it was great to be out with the guys. I felt fine on the bike, as long as I didn’t ride the hills too hard. The main thing, though, was that it left me with the sense of possibility. Hope replaced despair.

I’m feeling less discomfort today (Sunday). I’m seeing Rob again tomorrow, and am confident that I am finally on the road to recovery.

The final five weeks of my Cape Epic preparation are feeling quite disjointed in comparison with the tempo of the months that led up to Tankwa Trek. The two weeks immediately after Tankwa involved a few easy recovery rides, along with additional rest days. With me carrying this injury, the past two weeks have also involved less volume or intensity than programmed. The final week before Epic will be easy, so I’m certainly not going into the event overdone. If anything, I’m going to be slightly below peak, which is better than the alternative. 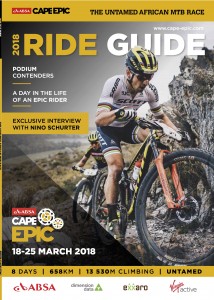 If you’re planning on watching any of the stages, the Cape Epic Ride Guide is a great resource (click the image above to download it). In addition to the suggested spectator points for the Prologue route, I’d add Deer Park. It is likely to be less congested than other spots, there’s parking close by, and there’s a climb (riders will be going slower, so you have the opportunity of actually seeing the riders you’re supporting, rather than just having them flash past).