Oscar Foulkes February 26, 2018 Cape Epic 1 comment
Last week, my son’s school hosted an information evening for parents of the Matric class. Two numbers jumped out at me. Firstly, that there are just 108 teaching days in 2018 (of which 25% have already been expended). Secondly, from the time they start writing mock exams, they are in permanent exam mode for 80 days.

This strikes me as being a lot of time being spent in limbo. Or, to put it more charitably, a lot of time without the directed structure of them learning new material. This is feeling very familiar to me at the moment, as my Cape Epic training programme enters its final few weeks. In terms of both volume and intensity, the workload has dropped considerably.

The bottom line is that I can’t look to training rides to provide affirmation that I am getting either stronger or fitter. I just have to trust in the seven-month process laid out by Erica’s training programme.

Racehorse trainers refer to horses that are having a small break in training as being on the “easy list”, which is where I’ve been for most of the time since Tankwa Trek. However, I was back on the Wattbike on Thursday for some LT intervals. LT is the acronym for ‘lactate threshold’, and these intervals involved five sets of six minutes in zone 5, with three minutes of recovery in between. I felt as fine as one can feel after an intense Wattbike session.


On Saturday, I was down for 100km on the road. Piet was away in Knysna riding the Knysna Bull, so I did a solo spin to Simon’s Town, which ended up being just over 94km. Once again, I felt fine and on track.

I was back on the mountain on Sunday, for 70km “on a hilly route”. There was a strong south-easter blowing, so I made my way around to Newlands and then followed the usual Kirstenbosch-Constantia route to Tokai. The only problem was that I felt extremely flat. I hadn’t had a late night on Saturday, nor could I point to any particular cause, so it was a bit disconcerting to not be frisky after having had a period of less intense training. It was still very windy when I got back to the City Bowl, and with my legs out of gas, I called it at 55km.

As if Erica doesn’t have enough other athletes’ issues to deal with, she then received a panic WhatsApp from me. This is likely to come down to psychology more than power to weight ratios, and Erica is brilliant at both.

Piet spent the weekend charging around the Knysna Bull course, apparently in the form of his life. My work is going to be cut out for me between 18 and 25 March! 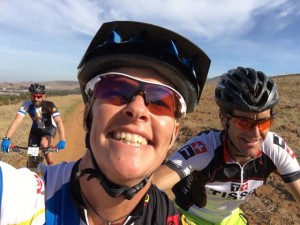 The planets seem to be lining up nicely.