Delivering, whatever it takes. Really?

Oscar Foulkes May 15, 2012 Uncategorized No comments 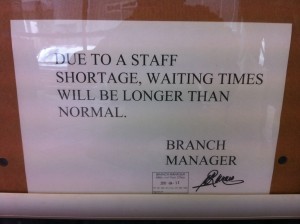 During Helen Zille’s State of the Province address earlier this year she announced some ambitious targets for rolling out high-speed broadband across the Western Cape. I think it’s a great initiative, which will be beneficial to both business and education.

One of the obvious ways in which the internet supports business is through ecommerce, a lot of which – admittedly – involves digital delivery (e.g. music, software or books) or the sale of tickets (i.e. airline, theatre etc). However, a sizeable chunk of online purchases are physical items that need to be delivered. In a time of Facebook, Twitter, and other cutting-edge tech applications, physical delivery is a seriously mundane concept. In fact, it’s so mundane that ecommerce insiders even have to resort to jargon – fulfillment – rather than call it what it is.

Word from commercial real estate in the UK is that retailers are shifting investment from high street stores to warehouses supporting online retail. To borrow from the title of a popular book a few years ago, there’s a lot of cheese being moved.

I always tell my clients that the perfect physical item to sell online is high value and light. That way one can afford to sell with free courier delivery. The reality is that much of what is sold online is both low value and relatively heavy or bulky. For these items the Post Office offers the most practical solution.

I’ll give you an example: as long as the dimensions fit within prescribed parameters, and the item weighs less than 1kg, the Post Office will send it counter-to-counter for around R20. Via courier, the same item can cost up to R100 in metropolitan areas, and up to double that in outlying areas. Yes, it’s possible to negotiate the courier fees, but they will remain many multiples of R20.

While the Post Office’s letter business was killed by email, the internet has created an entirely new one in the form of delivery of online purchases. It’s a hugely important role, both for existing businesses, and for ones that are yet to be founded.

Sadly, the Post Office has no sense of its importance to the economy, or, if it has, it’s doing an excellent job of keeping it a secret. The Post Office – in my experience – is without peer in its depths of utter uselessness to fulfill even its most basic mandate. This is an organisation that is dysfunctional, with a capital D.

For starters, there is no guarantee that your local branch will have the particular stamps you need (imagine going to KFC, only to be told that they have no chicken). The special boxes for the under-R20 shipments are rarely in stock, along with various other articles essential for the postage of an item, either locally or overseas. Systems and procedures vary from branch to branch.

Bulk postal drops have to endure the same interminably long queues as people collecting their pension payout. In Cape Town, Cape Mail is the only option for bulk drops. However, Goodwood/Epping is not necessarily cost-effective or convenient for many businesses.

Once the item has been passed over the counter (to a well-meaning and usually helpful employee) a further sequence of frustrations await. These, admittedly, apply mostly to international parcels sent via surface mail, which are then sent to Durban to await a ship. This wait can be two months, or occasionally, forever.

All the while the online retailer has to placate increasingly irate overseas customers. Calls to Post Office customer service can take an hour to be answered, and their online tracking facility is often not operational. Someone commented on Twitter last year: “How can the Post Office deliver letters if they can’t even deliver a web page?”

Interesting-looking items without a tracking number are often targeted by light-fingered employees. For example, I developed a special package for NoMUshop.co.za that qualifies as a letter, and can therefore be sent cost-effectively via airmail, anywhere in the world. The problem is that some of these envelopes go missing.

So, you can see, there are many ways in which the Post Office frustrates the efficient and effective functioning of businesses that are trying to grow. This beast desperately needs to be fixed. I do need to stress that the individual employees manning the counters, in the majority of cases, try very hard under difficult circumstances, but there is only so much they can do if the entire organisation is broken.

In his fabulous book, The Quest, Daniel Yergin quotes Andris Piebalgs (on energy efficiency) as saying: “It’s very important [for politicians] to be able to cut a red ribbon.”

I think that quote is pertinent with respect to the Post Office. Fixing it doesn’t give politicians photo opportunities at a ribbon-cutting ceremony (like opening the Gautrain, or a new airport building, for example), but it’s just as important for business.

Five years ago I went to a lot of trouble to make contact with the leadership of the Post Office, because I thought that its branches were the most underexploited retail space in the country (and I thought I could improve it). I still think that, but I have subsequently learnt that the problems on the other side of the Post Office counter make its retail underperformance appear quite trivial.

Getting South Africa working isn’t just about large projects. Sometimes, the first step is to get some basics right. The Post Office is an excellent place to start.