Oscar Foulkes March 23, 2017 Cape Epic No comments
I don’t think I’ve ever been happier to see a cloudy day with some faint early-morning drizzle. It did get up to 30 degrees later, but the couple of hours of coolth were gratefully received. The price we paid was a head wind for large sections in the first 80km, but it was worth it. Another day of extreme heat would have been a problem.

The day was billed as 113km, with 2150 metres of climbing. We seemed to cover slightly less distance, but we must have climbed at least an extra 200 metres. One can’t accuse Cape Epic of short-changing us on our entry fee. Under-promise, over-deliver. Ha-bloody-ha!

More than 1000 metres of climbing was in 25 of the final 30km. We struggled to reconcile the route profile with what we were experiencing, which made me a little bit grumpy. I got over my grumpiness when we hit the singletrack sections that took us to the finish – that was fun.

The route had me confused at times. When we reached the N2, when I would have expected to turn right towards Bot River, we instead turned towards Caledon, where we did a close inspection of the wind turbines. These are the same wind turbines we’d viewed from other angles over the previous two days. I don’t know how much more I need to learn by viewing them, other than experiencing first-hand why they build them where they do (think riding up several hills into a wind many forces stronger than the surrounding area).

The route took a few more detours further along, to the extent that it would be no exaggeration to say that the route had more detours than my mother-in-law telling us about her trip to the supermarket to buy eggs and milk.

After the second water point there was a gravel road section with a strong head wind. A Columbian team decided to lead the way, and we gratefully followed. However, they weaved across the road from the extreme left to the extreme right. And back again. It’s almost as if the lack of a white line disorientated them, if you get my drift. OK, enough innuendo for one paragraph.


The water points were at roughly 30km intervals, which is the distance of an easy training ride. So, I didn’t view the route as one chunk of 113km, rather three-and-a-bit training rides. That worked fine until Cape Epic lied about how much climbing we had to do.

The bottom line is that Piet and I both had a good day. Actually, we had a great day. We passed many teams, making up more than a starting batch worth of places. I know I said that the finishing position doesn’t matter, but it’s a nice affirmation of the many hours we’ve spent training, especially seeing as we have each had our turns at having off days this week.

One of the successful aspects of our riding partnership is that we have a similar attitude to descending. Being able to go downhill confidently is an easy way of making up time. Of course, having cautious riders ahead of us is an easy way to lose time, which is why we make an extra effort to get ahead of the bunch at the tops of hills. This is especially important just before entering singletrack sections.

Last night I had a text message from former pro rider Dave George (currently in 20th position on the GC with his team mate Justin Tuck), in which he said that the body adjusts to the fatigue, and that one gets stronger and stronger as the stages pass.

We go into the last three stages with our bodies and bikes in good shape, feeling good about the tests that await. Dave may be right. 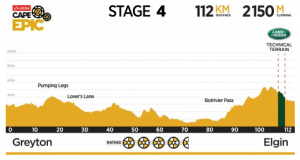