Are We There Yet?

Oscar Foulkes May 28, 2011 Uncategorized No comments 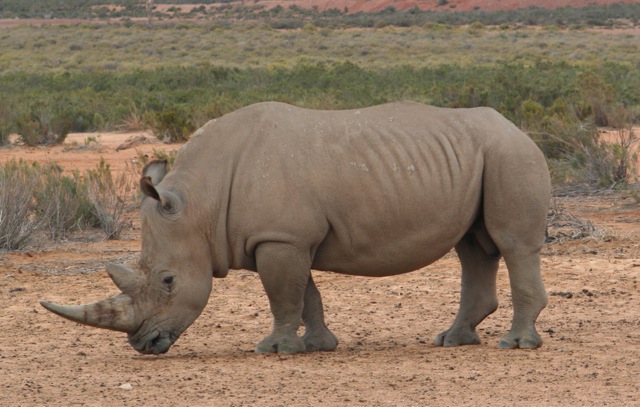 I love a road trip. Actually, I should be more precise, I love a road trip that includes the Karoo. For those of you from elsewhere in the world, the Karoo is the semi-arid interior of South Africa. Let’s just say it’s not densely populated, but for me isolation is one of its attractions. I also love the way things happen at a different pace. People are different, with a wholesomeness which the cynical would say borders on the naïve. And, while it’s a region that these days is not very wealthy, there was a time when the wool industry made these the richest farmers in the country.

When the going was good they built stately homes, so when you visit, there is also this sense of nostalgia, as you get a sense of a life that was, but which no longer exists.

We left Stanford after Easter weekend and drove to Touws River via Villiersdorp and Worcester. Our first night was planned for the Aquila Game Reserve, which boasts the Big Five, just two hours’ drive from Cape Town. We arrived in time for the afternoon game drive, which may well have been one of the coldest experiences of my life. It took several glasses of Jerepigo to thaw me after that! 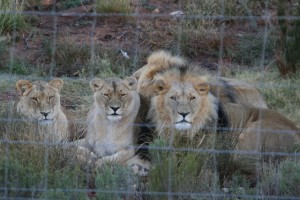 My views will not be that of the majority. I’m sure that hundreds, if not thousands, of foreign visitors are delighted to be able to put a tick next to Rhino, Elephant and Lion, all in the space of 30 minutes. For me, Aquila is a glorified zoo, selling overpriced alcohol and serving very sad food. Even on a half-price deal the visit was expensive.

The next overnight stop on our trip was Sutherland, which we reached after morning tea at Matjiesfontein. As with the rest of the Karoo, its change in fortunes is to thank for the way in which everything has been kept in its Victorian state. If business had continued to prosper someone would have felt the need to knock the buildings around and do some modernising. Thanks to hotel entrepreneur David Rawdon, the village was saved in the 60s from steady decay, and appears to do enough trade to be maintained. There are a few interesting museums, which are worth wandering around for a couple of hours.

Sutherland is much less attractive. In fact, it’s such a depressing place that I couldn’t imagine spending more than the night we did. It’s also unbelievably cold (i.e. below freezing), which is an inevitable experience when one does the outdoor star gazing thing with local buff Jurgen. It is the biggest sky you’ll ever see, and Jurgen’s telescopes enable you to see amazing sights in outer space.

Of course, the ‘proper’ telescopes in Sutherland are a lot bigger than Jurgen’s, the biggest of which is the SALT (South African Large Telescope), which is also the biggest telescope in the southern hemisphere. 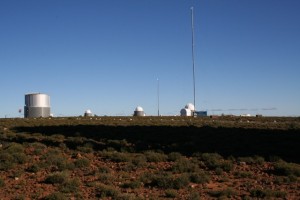 The cluster of observatories in the vicinity of the SALT

From the bone-chilling cold of Sutherland we moved on to Beaufort West, where we were booked in at Lemoenfontein. This well-located establishment is just a few kilometres off the N1, on the northern side of the town. It’s convenient as an overnight stop for travellers, but it’s particularly good if you’re spending a few days. I should mention that the KFC drive-through lunch we had upon arriving in Beaufort West was most enjoyable. Yes, yes, enough of the jeering, but when you describe the Twister as a soft tortilla wrap filled with crunchy chicken goujons, chopped salad and mayonnaise, the picture does change.

The teenager had hit bit of a wobble in Sutherland the night before, and we loved Lemoenfontein from the moment we walked through the front door, so our one-night booking was immediately converted to two. The house was built as a hunting lodge in the mid-nineteenth century. Not only did the proprietor pick a fantastic spot against the slopes of the mountain, but the house itself has wonderful proportions. And, what made us really happy was the quality of the ‘table’. Both our dinners were delicious, and showed up the mediocre offering at Aquila. 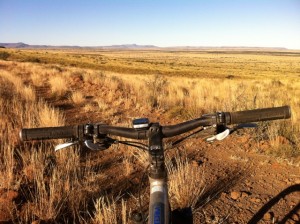 How's that for a view from my handlebars? An iPhone snapshot during my afternoon ride at Lemoenfontein.

After two most enjoyable nights at Lemoenfontein we drove to Prince Albert, arriving at about midday. Their olive festival was in full swing (see the video I took of the Eden Minstrels here), so we had a walk around and then ended up at African Relish, where we had a delicious lunch. We stayed for a demonstration by Jeremy Freemantle (it is a “recreational cooking school”, after all), which was very interesting. Even if you’re not a foodie, African Relish is a great space to be in. Plan a weekend in Prince Albert, and make sure that you include African Relish.


It’s a shame that we left ourselves with less than 24 hours in Prince Albert, because there did seem to be a lot that we were leaving undone. We weren’t going to leave without dinner at Gallery Café, though, but getting our bodies ready for another meal required a jog around the village (or, in my case, a power cycle on the road towards the fig farm).

After breakfast the next morning we headed for a family lunch in Robertson, driving to the R62 through the spectacular Meiringspoort.

Each piece of driving had its end point, but the road trip wasn’t aimed at reaching any particular objective or destination, so the “are we there yet?” question wasn’t necessarily relevant. A road trip is all about the journey, about the interesting places one finds. More than anything, though, it’s about four people spending a lot of time together, often negotiating the itinerary while the drive is in progress. And that, really, is the point of the road trip. It’s about the people who share the journey. The route is a bonus.