A New Source of Wine Bargains 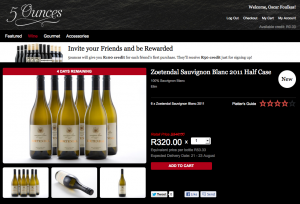 One of the benefits of being involved in the wine industry, as I was from 1993 until 2009 (with another two years of consulting), is that I didn’t need to put much effort into procuring my next case of wine. And, I hardly ever paid retail prices.

Let’s just say I got spoilt. The other thing that happened was that I was generally in control of my own drinking choices.

A couple of months ago, I was approached to produce content for a new deal website, 5 Ounces. I’m very happy writing about wine in a sales orientated way – it is, after all, something I’ve done for the best part of two decades. The difference is that this time I play no part in the selection process, nor in the commercial decisions related to pricing etc. So, I truly am not in control of my drinking choices.

Apart from the fact that it’s gainful employment (very useful thing, money) I’m getting exposed to many more wines than I would have been drinking otherwise, several of which are seriously exciting. What’s also been striking is the number of top end reds that are five or six years old (there’s even one ten-year-old), which suggests that some producers are having a tough time selling their wares. It may not be ideal for the producers, but it’s a great opportunity for us consumers to get access to reds that have already been partially matured. And, best of all for 5 Ounces customers, is that there’s always a deal, which is usually a discount of up to 45% off the retail price.

(When you sign up using this link you get a R50 credit on your first purchase.)