A Walk (and Fall) on the Dark Side

Oscar Foulkes May 31, 2009 Uncategorized No comments 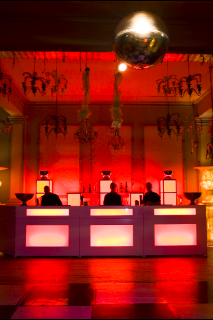 There was pleasure in abundance at the Spoon Room on Friday night, a party organised by a loose grouping of the teams from Dish Food & Social (www.dishfood.co.za) and Blend (www.blendeventlife.co.za). Started a year ago as a way of bringing some energy to Cape Town winter, the event derives its name from the spoon chandeliers hanging in the function area of the Dish premises. The space is fabulous – in a previous incarnation it was the ballroom of the Avalon Hotel – with extra high ceilings, wonderfully proportioned windows and columns, as well as mouldings on the walls. Apart from the spoon chandeliers there are numerous other chandeliers which hang here awaiting décor hire by Event Interiors (www.eventinteriors.co.za). DJ Steve Hypa (www.stevehypa.com) created a great vibe with music that started with lounge, moved through some house, and then without anyone noticing the transition, had us singing along to Come On Eileen

. We could have been wearing cool gear, the dim light may well have rolled back the clock (from a wrinkles point of view), but when you’re singing along to Dexys Midnight Runners there’s no way of pretending that you’re anything but 40 years old.

It didn’t take much more than the addition of music, lighting, and Blend’s stylish bars to turn the venue into hip space. Guests paid R120 for entrance, which included a selection of delicious canapés. Having attended a couple of Spoon Room parties as a guest I can say unequivocally that the most recent was not only the best there’s been, but also a social gathering to be attended at all costs.

About 10 years ago I had a dream involving Afrikaanse Weerstandsbeweging (AWB) leader Eugene Terreblanche falling off his horse. Therapists love dreams; mine wondered if AWB couldn’t in my case mean ‘Always Well Balanced’ and that I feared loss of control (like falling off a horse) if I didn’t maintain this sobriety. All that may well be debatable, but the fact remains that I seldom go beyond a point of comfort when it comes to party situations. What I’m getting to is that I had every intention of having an early-ish night on Friday.

It is probably relevant that the age of the guests was skewed to 40-somethings. Speaking for myself, there is something a little intimidating about walking into a bar or club populated by painfully hip (younger) singles, especially when it’s a space one seldom frequents. Spoon Room offered the same kind of stylish experience amongst a like-minded group of slightly older but still young-feeling people.

I was slowly sipping my way through a glass of The Dark Side (“Succumb to the hedonistic allure of gorgeously sensuous Cabernet Sauvignon entwined with Shiraz and the spiced vanilla of French Oak. A wine with curves where others don’t have places. Uninhibitedly richer, juicier, bigger, bolder – and proud of it.”), when a friend pushed a tequila into my hand, followed by another. I bought him one to reciprocate. Later there were Jägerbombs followed by more tequilas. There was absolutely nothing well balanced about this level of consumption.

The party just got better and better. The energy was fantastic. Perhaps this part is relevant to 35-somethings that are well beyond the dating games of teenagers, and in the absence of that superficial angst are able to get on with having a good time. The dark side (in a more libidinous sense) was near enough to be fun, but not so close that anyone was going to get into trouble.

The ancient Greek principle of hedone held that the pursuit of pleasure was Man’s greatest good. According to this philosophy the pleasurable activity being pursued wasn’t a moral issue; the degree of excess was. How one resolves all these points of relativity isn’t clear.

Anyway, at roughly 2.30am (about four hours beyond my bed time) proceedings took a rather large “jump to the left” – or in my case – a firm, unexpected and deliberate push backwards from someone having less than fun than myself. Contrary to popular myths about alcohol consumption enabling people to flop harmlessly to the ground, my body met a number of rigid objects on its way to the floor, causing as much pain as falling off a horse.

My injuries will keep me off my bicycle for a couple of weeks; memories of the hangover may well keep me off tequila for several months, and The Dark Side is possibly best experienced in vinous form.

“Everything in moderation” may be a sensible motto, but feels like a whole lot less fun.

(Join the Spoon Room group on Facebook to be advised of future party dates).