Oscar Foulkes May 20, 2009 Uncategorized No comments 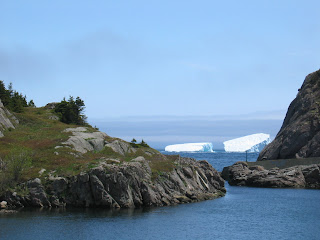 Telling people I’ve been, or am on my way, to Newfoundland never fails to draw a response. In Canada – of which the island is a province – some kind of suggestively disparaging comment about “Newfies” is likely to follow. On this point I’m not going to beat about the bush – Newfoundlanders may well, in a big city context, be naïve, and yes, with their Irish and British heritage their island accent doesn’t sound at all North American. But I defy anyone to find a group of people, anywhere in the world, that takes more sincere interest in having a conversation. The world can do with a whole lot more of this kind of down-to-earth, old-fashioned nice-ness.I have to admit, though, that I have also been guilty of exercising some prejudice with respect to Newfoundland. On Thursday night last week I presented a wine dinner in St John’s (having flown in at 1.00am, continuing my outrageous Canadian itinerary). The object of my discrimination was a raspberry sorbet. I was concerned that the acidity of the raspberries would ruin diners’ palates for the red wine to follow. And, if I’d had control over the menu, I may well have vetoed the sorbet. I needn’t have worried; the flavour of black Newfoundland raspberries is extraordinary, without any of the acidity I was preconceiving. In fact, it even complemented the Inkspot we’d been drinking.

They were the friendliest raspberries I’ve ever eaten, but then what else could one expect from Newfoundland?