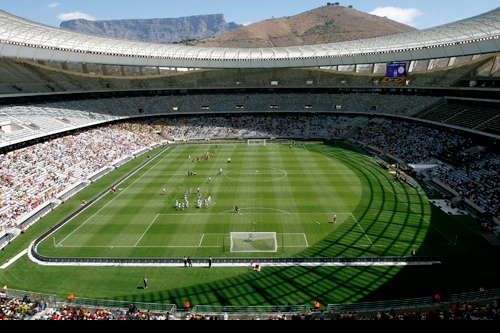 Four of us wanted beer. No problem there, other than the somewhat pricey R20 for Heineken. However, I also needed to buy one white wine and one red.

I can understand the principle of brands paying for the rights to certain concessions, hence Heineken being the only beer on sale.

However, for a city within such close proximity to the Cape’s winelands, it seems completely unbelievable that its biggest taxpayer-funded facility would not have wine for sale. The wine industry, of course, is one of the biggest contributors to the Western Cape economy, employing some 275 000 people.

The argument that Heineken paid for the concession rights doesn’t hold. Imagine if some other principality paid for the rights to display the backdrop of another land feature, so that visitors to Cape Town Stadium saw not Table Mountain, but Mont Blanc or the Sugarloaf.

The stadium is going to be funded by taxpayers for decades to come. Is it too much to ask that the benefits are holistically extended throughout the Western Cape economy?

Looking at this from another angle, distribution/availability of product is one of the wine industry’s biggest obstacles to building market share. This largely has its roots in the fact that no single brand has sufficient budget to buy its way into the market, the way that brands like Heineken can. Collectively, the entire world’s industry could, but one cannot imagine them co-operating to that extent.

Until then, Capetonians will pay a premium to drink Dutch beer in their own stadium.