It’s hard to believe that more than five months have whizzed by since the opening of Vaudeville. This equates to the service of nearly 25 000 meals, a rather startling realisation (more startling, perhaps, is how long it took me to get there as a guest. Read about my evening here). The total has been arrived at in increments of a few hundred at a time, which is testament to the power of small steps.

Another month, of course, means another menu. The June menu launches on Wednesday 26 May. Thereafter, the new menu will launch on the first Tuesday of every month (or thereabouts). 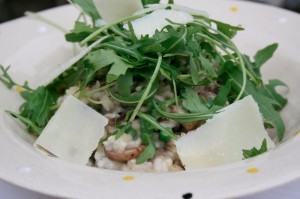 The vegetarian option – taking into special consideration that we’re now officially in winter – is a mushroom risotto. It seems a shame that this dish should be playing the ‘quota’ role, because its deliciousness cuts across all dietary preferences. OK, perhaps not vegan, because it’s a dish that really does need a generous grating of Parmesan. We also like to fry the onions, garlic and rice in butter at the beginning, so dairy (and, God forbid, garlic) are essential components. Upon request, preferably at the time of booking, we happily cook this dish without the offending components. Our preference is for a drier style of risotto, rather than a more ‘soupy’ consistency. 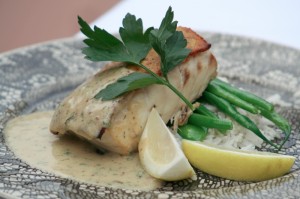 Salmon-gratinated fish of the day with basmati rice, greens and a dill sauce

We always struggle a little with the fish dish. The main issue is one of consistent availability. Last month we were able to put tuna onto the menu for one week, but its preparation required a temporary change to the menu. Our stop-gap has been Blue Wahoo, a Pacific game fish with delicately-flavoured white flesh. This month we’re doing it with a salmon-impregnated, gratinated crust. Put simply, we blitz salmon, bread crumbs, Parmesan, dill and butter. We roll this out into a thin sheet that we put on top of the fish. We roast the fish at 220-degrees, which releases the flavour from the crust and browns it. I’ve been aching to test the response to Hake (probably our most underrated fish), but have been concerned about public response to a fish that has the perception of belonging in a fish and chips shop. Vast quantities of hake are flown to Spain every week, which says a lot for its desirability. What is it they say about a prophet in his own country?

The salmon-gratinated fish is served with rice, greens and an intensely-flavoured dill sauce. Wheat- and/or lactose-intolerant guests are welcome to order this dish without either crust or sauce. 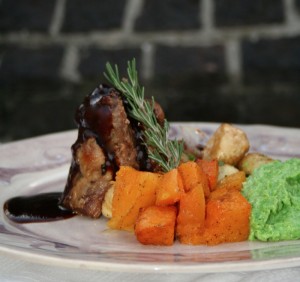 The meat dish is also something that requires a great deal of thought and investigation. Everyone has a different idea of how pink (or not) a steak should be, which makes simultaneous preparation of 200 steaks quite challenging. Stews don’t have that problem, but it’s almost impossible to make them look nice on a plate. For the June menu we’ve got our butcher to make up individual lamb roasts. These are taken from the ‘breast’, effectively the forequarter ribs. The meat is then deboned and rolled, with a minced lamb and rosemary stuffing. The rolls are gently braised until tender, and are quite delicious. We serve them with caramelised potatoes, mushy peas and a hearty, reduced jus. The end result is another dish perfectly suited – we believe – to winter eating.

We have a feeling that deboning and rolling several thousand lamb breasts is likely to end what until now has been a good relationship with our butcher, but we think it’s worth the risk.

For dessert, we offer two options. The totally decadent chocolate and orange ganache tart remains (even the shortcrust pastry is sensational). The ‘fruit slot’ is being taken over by a caramelised apple puff tart with crème Anglaise.

Hi there
Could you add a dessert with no wheat??? Are the mains all wheat free?

We’ll certainly bear that in mind for the July menu. However, we have – on request – served the apple dessert without the pastry.

The crust on the fish is the only wheat component amongst the main courses. There’s no problem to order the fish without the crust. The lamb and risotto do not contain any wheat.

My man and I shall be joining you this Saturday night.
The entire menu looks absolutely delicious, I am having difficulty deciding.
What would you recommend?
Thanks

I’m not sure I’d have an easy time deciding, either. I had lamb, but could as easily have mushroom risotto or fish next time. Tonight’s risotto bowls looked as if they’d been licked clean when they got back to the kitchen!