The Stuff of Motoring Legend

Oscar Foulkes October 10, 2018 Uncategorized No comments
If I had a workshop attached to a motor dealership I’d do the same. It should be relatively easy to sell a new vehicle to someone who has done 100,000km. One would think that at 200,000km it’s a slam-dunk, and at 300,000km, well, it should make taking candy from kids look difficult.

For the sake of brevity I’ll skip the pleasantries, which always involve the sales person asking me if I have a cold. Even without me dropping cancer into the conversation, she is left speechless for a bit when I tell her that this is my voice.

It doesn’t take long for her to come back at me, though: “Would you like to upgrade your Fortuner, Mr Foulkes?”

At this point, I feel like AB de Villiers with his eye in, the part-time bowler has dropped one short, and the ball is sitting up beautifully, preparing to be launched into row 20 behind the mid-wicket boundary.

“But I already have the most upgraded Fortuner.”

Then she starts fumbling through her notes, throwing features of the newest models at me, eventually moving to exit the conversation as elegantly as possible.

Before I get onto my rationale for my car being as upgraded as claimed, here’s my view on how to conduct this conversation. Begin by congratulating me on having a vehicle that has covered this many kilometres, which might also lead into chatter about the big trips and memorable family holidays. Perhaps also praise me on keeping a pristine service record. At this point it might be appropriate to guide the conversation in the direction of a new Toyota. After all, the record with my vehicle has proven the reliability and longevity of the brand. OK, maybe not quite as easy as AB slapping long hops to the boundary, but the bit of verbal footwork improves the chances of success.


Right, so how is my ten-year-old Fortuner, that has done the equivalent of eight circumnavigations of Earth, the upgraded version?

For starters, it is paid off. I owe nothing on it. A vehicle that has no corresponding debt has to be an upgrade on one that is encumbered.

Secondly, this is a vehicle with epic history (as befitting its mileage). It’s the stuff of legend. It’s been involved in the creation of many memories, with road trips to Namibia and Lesotho, not to mention the breadth and width of South Africa. It’s done five Tankwa trips for Afrikaburn, countless family holidays, and general running around the Western Cape.

Yes, there was also the time I got stuck on the N1 in Paarl when the alternator gave in, but that was at about 270,000km. One has to expect these things to happen eventually.

My Fortuner gets upgraded every time I put my (sponsored) Santa Cruz Blur on the bike rack, because the bike is worth much more than the car. I couldn’t claim the same if I switched to a brand new model.

I will, eventually, be forced to update my wheels. Hell, the sound system is so old it doesn’t even have a slot for an AUX cable, leading to much incredulity on the part of my young nephews. The vehicle will reach the point where a set of new tyres will be a significant portion of the its value.

Until then, I’ll be on standby for the six-monthly phone calls from the sales person. 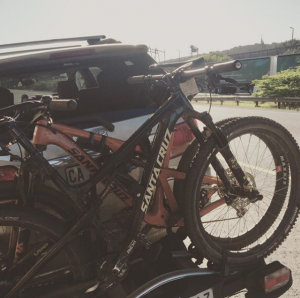 With a brace of Santa Cruz on the bike rack, which seriously upgrades the value.