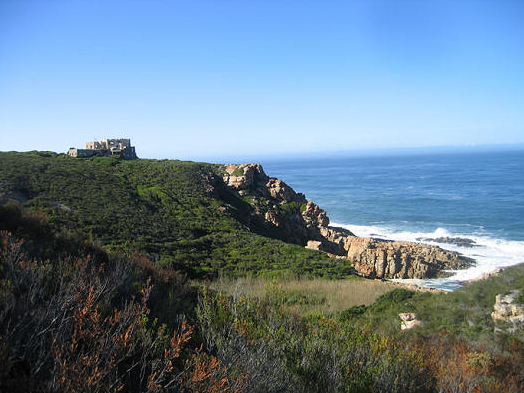 Out-of-town weddings are often the best, because they end up being an entire weekend of spending fun times with people one may not see that often. A family wedding several years ago involved us arriving in Plettenberg Bay on the Friday, with a large inner circle gathering for dinner. A sidebar to the dinner was my 60-something mother-in-law joining the youngsters in a couple of rounds of tequila shots (my kind of granny!).

The wedding itself took place at a cliff-top castle, with views of the Robberg peninsula. It was a smashing evening (complete with major public liability insurance in case anyone took a wrong turn to the bathroom). At some point around 2 or 3 am I went to bed, because I had to drive back to Cape Town early-ish the following morning. Pam (my mother-in-law) was supposed to stay somewhere else, but because there was no-one sober enough to drive her to where she was staying, she dossed down at the castle, with make-shift pyjamas consisting of one of my surf-brand t-shirts and Andrea’s pyjama pants (Andrea is my wife, so Pam’s daughter).

She wasn’t able to tell us what time she’d finally got to bed, other than that the DJ had already stopped playing (Pam is something of a party animal when she gets going). There were several chores to be done the following morning, revolving around packing up a house in Keurboomstrand, which was also where Pam was supposed to be spending the night. Andrea agreed that Pam would get a lift with her, but her brain wasn’t really functioning yet, so she left without Pam.

Pam had been directed to the parking lot a little up the road (in truth, less than 50 metres). She obviously didn’t encounter Andrea in the parking lot, so kept walking up the road, thinking that the car must be a bit further. I should add that it was a gravel road, covered with many stones of different sizes. And, Pam is not the most physically active person (if she didn’t have to go outside to smoke she wouldn’t get any exercise at all).

So, there she was, dressed in the make-shift pyjamas, walking barefoot up a road she may not even normally negotiate in sensible shoes, carrying the previous night’s outfit. After walking about 500m, she was offered assistance by a passing motorist, which she declined with a cheery, “Don’t worry, thank you, my daughter is just around the corner.”

Goodness knows what the motorist thought, because Pam looked like an escapee from a mental hospital.

I left a little while later, unaware that Pam had missed her ride. When I finally caught up to her she was about a mile up this gnarly road, still barefoot in her borrowed get-up, with her party gear carefully draped over her arm, and clearly still optimistic that her daughter was “just around the corner”.

The incongruity of the situation isn’t something you could script (unless, of course, you’re making a sequel to The Hangover).

With the right crowd, the wedding can be every bit as out of control as the stag party. The legend of out of town weddings continues…