The Road to Tankwa

Oscar Foulkes May 4, 2014 Tags: afrika burn, afrikaburn, festival, tankwa Festivals No comments
The vehicle stranded by the side of the road was not on its way back from the Burn. For starters, it wasn’t packed to capacity with camping oddments. Secondly, the middle-aged men were dressed for a day at the office. They had a spare wheel, and a jack, but no means of cranking it, hence the reason for them flagging me down.

While the wheel was being changed we made small talk about what each of us was doing on this isolated road. In my best Afrikaans I told them I’d been to a festival, called AfrikaBurn. The lack of comprehension in their eyes told me to stop right there.

Telling them about the Dr Seuss-like scenes would not have helped them anchor the event. I couldn’t possibly have told them about people spending months building huge artworks that would then be burnt as spectacularly as possible. How could they understand adults taking part in fantasy dress-up (or un-dress) for purposes other than a themed 50th birthday party?

Perhaps I could have told them about a litter-free festival area populated for a week by a reported 10 000 people. Or the random acts of giving. Or the total absence of judgement (and its closely related cousin, complete acceptance). I’m sure the scale of community effort would have impressed them.

I don’t have the definitive definition of what AfrikaBurn is, or isn’t. Apart from the fact that I’ve been once only, it’s an experience that will be different for every person who attends. All I know is that the first hour of our drive home was undertaken in complete silence. None of us was ready to head back to ‘real life’, nor did we want to listen to ‘commercial’ music. In time, I’m sure I’ll have a better understanding, but for now I’ll stick to describing my four days of AfrikaBurn as profound.

The noun ‘congregation’ is linked to the verb ‘congregate’, the action of people coming together in some kind of common purpose. I’m not going to suggest that worship or religion form any part of the festival, but I feel as if I have been affected on a deep – dare I say, spiritual – level.

Most of my professional life has been spent trying to get people to buy more of something, to add the marketing sauce that makes products more enticing. By contrast, AfrikaBurn is completely non-commercial: ice is all you can buy there. No branding of any sort is permitted. People ‘gift’ things, whether it’s a fully-fledged theme camp (complete with DJs), or endless cappuccinos, or bicycle repair, or perhaps just a few biscuits.

The thing is this, what makes AfrikaBurn (as several dotted-around signs reminded us) is the people who attend. The festival is a giant exercise in ridiculousness – its remoteness, the “tyre-munching” gravel road, the lack of any


communications contact with the outside world, the extreme aridity of the landscape, the burning of artworks, I could go on. In the way we dress ourselves, or decorate our campsites, we are gifting ridiculousness. In the process we allow the suspension of judgement, which is a good place to visit.

On a superficial level, judgement can be taken to refer to outward appearance, or lifestyle choices. But it can also relate to more fundamental elements of how society functions. Like, should it be the norm that rubbish bins are provided in public spaces, especially when many people don’t use them anyway?

My journey through AfrikaBurn was probably also coloured by the fact that I took my daughter, who was partying with her friends, so I was alone every night. I may have been surrounded by 10 000 people, but I have seldom felt as lonely as I did, moving from one ‘party area’ to the next. I would happily have made a speech in front of those thousands of people, yet I was incapable of engaging or somehow connecting with individual strangers (all of whom were in their own groups). I was desperate for intimacy; perhaps that was just a rawness caused by me being in this zone of suspended reality. Whatever the cause, it was one of the features that contributed to what for me were the powerful emotional effects of being at AfrikaBurn.

One of the big themes of the organisers’ communication is for participants/attendees to get involved, to participate. There is a practical element to this, because the festival can’t function without volunteers. But the real reason is that in order to get the most out of the experience one needs to have skin in the game (yes, some people take the ‘skin’ part literally). Getting invested may involve no more than dressing for the occasion, even if people’s interpretation of “radical self-expression” varies.

You should read AfrikaBurn’s Guiding Principles. They may be basic, old-fashioned common sense, but it’s hard to argue that the world would not be a better place if more people adopted them.

If I had told the gents by the side of the road more about AfrikaBurn they may have had thoughts that involved their version of the pejorative “crank”, denoting some kind of delusional madness. A crank – in the form of a bent shaft that imparts circular motion – is what they needed to get out of a pickle.

In the early days of motoring, car engines were started by means of a crank. Perhaps the world needs more cranks, of every description. 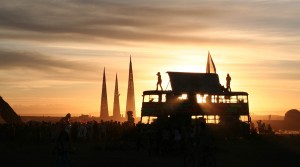 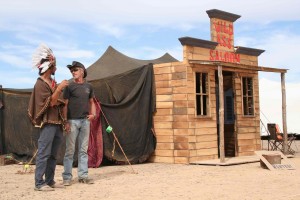 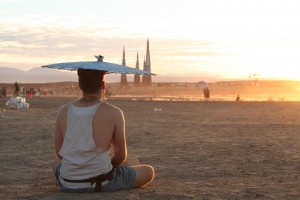 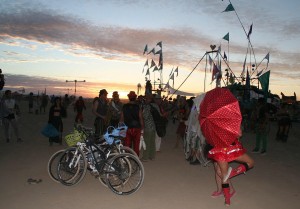 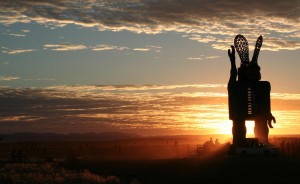