Some People vs Most People

Oscar Foulkes October 23, 2018 Cape Epic, Uncategorized No comments
I have sat through many extremely dull and unnecessary race briefings during mountain biking stage races. As farm manager Rickus Jooste put it while doing duty during The U, the fit and skilled riders will say afterwards, “What were you talking about, that was easy.” The unfit and unskilled will say, “Jeez, they didn’t say it would be this difficult.”

But, it helps to know – basically – what to expect. In his dry, understated way, Rickus prefaced his route briefing by putting up a slide of a bell-shaped curve, recording the previous year’s results. The fastest and slowest riders were annotated “some people”, sandwiching the main part of the curve, which was labelled “most people”. Along with a few other dry-as-Swartland-in-summer comments, it quickly descended into the funniest race briefing I’ve ever attended.

He repeated the humour on the second night when using dance/music videos to illustrate the need for “rhythm and flow”. The all hips and generally loose bodies in Uptown Funk were juxtaposed with a wooden Theresa May doing her wooden best to sashay onto the stage to strains of Dancing Queen.

The some/most people comparison could equally be applied to pretty much the entire event.

It’s the kind of outlier experience that one hesitates telling others about, because you don’t want to put pressure on the 200 available slots for the following year’s event. However, when as much thoughtful attention to detail has gone into the planning and execution, it is only right to heap praise. They deserve nothing less than deep and profuse expressions of gratitude.

It was striking how much more peaceful the event was with just 200 riders, as opposed to the 1200+ of Wines2Whales or Cape Epic. There was no sense that we were in the middle of a hyped-up jamboree. This was about great trails, a stunning setting beside the dam, country hospitality, and the fellowship of keen mountain bikers. The closest one can get to the same experience is by doing the Imana Wild Ride.

There are very few parts of The U that follow jeep tracks or farm roads. This is all about trails that have been finessed through the fynbos. Of course it took a lot of work, but it’s generally a case of accommodating rocks and protea bushes, or finding a way uphill that doesn’t involve going straight over the top. There’s a lot of twisting and turning, and at times it almost felt as if the trail had been routed to specially traverse flat rock outcrops, of which there are many.

One has to concentrate all the time, watching for rocks in the trail, or the ones adjacent that could snag either pedals or handlebars. Some turns or passages are extremely tight.

With all these mini obstacles, one is often required to apply a little extra power. Also, due to corners sometimes being taken a little slower than usual, extra power is required when exiting. The Piket-Bo-Berg (PBB) trails also have more switchbacks than any other route I’ve ridden – getting up and around the tight, steep turns is also power hungry. As a result, a large number of riders (myself included) cramped on day one, and I was in danger of cramping for much of day two.

Liberal use has been made of bridges that keep the trail flowing across parts of the mountain where there is no trail.

Due to the technical terrain of the PBB trails, downhills are seldom free miles, but man oh man, are they fun to ride!

I don’t want to scare people off, because it’s all rideable (by “most people”), but there might have been more technical stuff in the two days of The U than in all the stages of the two Epics I’ve ridden. There are certainly more switchbacks.

I’ve never been a confident rider of downhill switchbacks. Eventually I was riding pretty much all of them. What helped was having secure berms on the outsides, in just another example of sensational trail building at work. I’m hoping my switchback riding has turned the corner (I promise I didn’t mean that as a pun).

This is not quick riding – if we rode Epic at the same pace we rode The U (and we were “most people”) we would be in danger of not making cut-off.

The landscapes we rode through – and viewed from afar, generally up high – are spectacular. Given that the PBB trails can only be ridden during an organised event, of which there are just two per year, one must grab those opportunities when they come along.

I need to make mention of the catering, which falls into the “some events” category. The lunches were in the style of Ottolenghi – mostly vegetarian, with loads of fresh, crunchy things – which might not have been to the taste of “most people”, but I loved it. Dinners were tasty, if somewhat under-catered from a quantity perspective, especially considering how many calories we were burning on the trails. Breakfasts were fine, although curiously lacking in butter for the bread.

The orange juice station involved two fruit bins of oranges from the farm plonked next to the juicer. Can’t get fresher than this!

Truth Coffee did a roaring trade, as well as CBC beers, the delicious Piekenierskloof wines and the Sugarbird gin. Pura’s “adult sodas” were handed out as we crossed the finishing line.

Race medals comprised little handmade wire bicycles. The organisers’ attention to detail showed in the bike boards on these miniatures being printed with the actual number of the rider receiving them.

Back to real bikes (of the carbon variety) – our Santa Cruz Blurs performed very well. I got pushed beyond my comfort zone a few times, but that was more about what was happening in my head. I had more than enough bike for the job. While the Blur might have been pitched as a marathon bike when it was launched, it is so much more than that.

I urge you to work your way through Chris Hitchcock’s event pictures on the PBB trails Facebook page.

These are “some trails”. 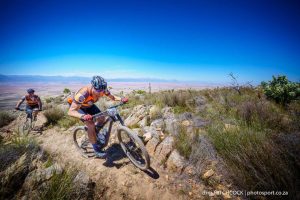 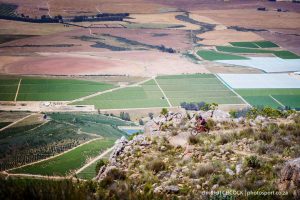 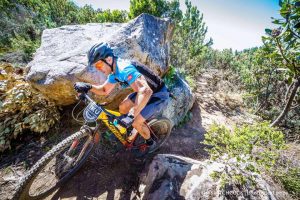 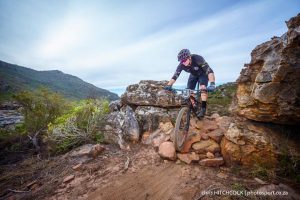