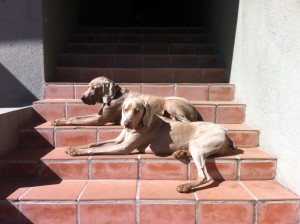 Kai (back) and Ollie (front) after a morning on the mountain

Our dogs can’t be quite as stupid as I accuse them of being. I’m not going to get ahead of myself in trumpeting their intelligence, but I will say that they seem to know the difference between weekdays and weekends.

I suppose what gives it away is that on weekends no-one is shouting at children to eat their breakfast, put on their school uniform or brush their teeth. On weekends, the teenager is likely to remain in bed until mid-morning, while the pre-teen heads straight to the couch to watch Masterchef or Choccywoccydoodah.

Two Weimaraners – Ollie and Kai – follow me everywhere I go in the house, Ollie more energetically so. Kai stares at me balefully, apparently hoping to guilt me into the next move.

Actually, not much guilt is necessary, because a mountain bike ride on Table Mountain is one of my favourite activities. The moment I reach for the drawer in which my cycling kit is kept, the game is on. Ollie’s excitement ratchets up a level. At this point, no dose of Ritalin or Valium could calm him down, as he begins dog wrestling with Kai.

I should add that he alternates between this rambunctious play and sticking his nose into the cupboard I’m getting kit out of. He really is a most inquisitive creature.

All is well until the moment that I’m pulling on my cycling shorts. I have learnt from experience that I should have my back to the wall when bending down to start the process. Anyone who wants to sniff my bum does so at their own risk, but Ollie’s preferred method results in me having the rather nasty surprise of wet dog nose in my crack.

Once my shorts are safely on Ollie gets yet more excited – as if that was possible. Despite being neutered, he displays excitement of another sort. I suppose I should be grateful that some creature on the planet gets excited when I’m in Lycra, but actually this is just weird (there is another round of weirdness that then plays out between the two neutered male dogs, but I can’t describe it here).

Our usual ride takes us to the King’s Blockhouse, often via Rhodes Memorial, a ride of between 16 and 22 km. There are various ponds and puddles on the mountain, but at the Blockhouse I need to share my own water with the dogs. Ollie has learnt to drink what I squirt for him from my water bottle, but Kai has been a bit slow in catching on.

For them, most of the rest of the day is then spent sleeping. Until they hear that drawer open.