Oscar Foulkes February 27, 2017 Cape Epic 2 comments
It’s tempting, this week, to prattle about the little bits of training I did throughout the week. I could kick off with Monday morning’s Wattbike session that didn’t feel quite so lighthearted while I was doing it, or the same day’s banter-filled gym session. And then there was Wednesday morning’s ‘easy’ solo road ride that was ridden at slightly speedier pace than when I was slipstreaming Piet the previous week.

Certainly of significance, considering one of the cornerstones of my Epic journey, was the check-up on my throat. All clear, thank you, and we’ll schedule the surgery to enlarge my airway for April (while on the subject, perhaps the manufacturers of radiotherapy equipment should be sponsoring my Cape Epic entry).

This is all the easy stuff. Perhaps it’s all still too near, but I’m struggling to get perspective on the experience of riding the Knysna Bull from Friday to Sunday. It was a kind of physical intensity that also feels emotionally intense.

I should add that over three days we didn’t just ride the roughly 200km of the race, we also rode the 70-ish kilometres to the three days’ starts, which included the climb out of Knysna each day. In round numbers, the mileage we clocked was 100km, 90 km and 80km.

The plan was to turn the race into something that roughly approximates Epic stages, although Tankwa Trek, which we rode two weeks ago, does a better job of that. However, whereas Tankwa was largely ridden at a pace that ensured completion, Piet was in racing mode this weekend.

Because of us riding to the start each day, I couldn’t reliably answer any question about the ease or difficulty of the race. Those 70 to 90 minutes of constant pedalling depleted me of a pile of energy. It’s good training, but given my lack of roadie background, is not my strong suit.

Day One was the longest, with the most climbing, and the temperature got into the high 30s. This was the longest ride to the start, after which I battled my way through the day. Then, from the final water point, super-competitive Piet laid on the pressure because he wanted to catch up to his business partner, Jan. I had the ‘hand of Piet’ on my back up a few climbs, not because I couldn’t have got there myself, but because he wanted to go faster. The final part of the race was alongside the lagoon. Piet did what he most loves doing on a bicycle (going fast on the road for a long distance), and I did all I could to hang onto his back wheel. Over the final few kilometres we must have made up a kilometre on Jan and his riding partner, and despite a frenzied sprint to the finish line, failed by a metre to reel them in.

Day Two got wet and cold, with a long climb into the mountains above Rheenendal. The worst part of the climbing was a longish, very steep section just before the first water point that caused my heart rate to spike, and my breathing to sound like the braying of a donkey. I will admit to walking for a small part of this hill. There were a couple of downhill sections that were heaps of fun (and taken at high speed).

I have finally found one part of cycling that I can do on a par with Piet. I hesitate to say ‘faster than’, because that would simply spur him on. I suspect, though, that this parity will end when he upgrades from the S Works he currently rides. Until then, I have the Yeti advantage.

The final, flat section of Day Two was longer than the previous day. Once again, I latched onto the RECM Express, turning Piet’s back wheel into my entire universe.

On the pedal to the start of Day Three, Piet outlined his plan. It was akin to a trainer instructed his jockey to go the front from the start, and then to improve his position. At this point, I need to mention that I may be suffering from Stockholm Syndrome – when Piet laid out the plan, I immediately offered a range of elevated heart rates at which I would ride.

As things turned out, the pace of the first 10km was so furious that I couldn’t keep up. In horse racing parlance, I was off the bit from the start. It was easier for me to maintain high intensity once we got into the singletrack sections, because of the little bits of recovery in between. And, of course, thanks to the Yeti, hardly any braking was required on the descents.

Stopping at the water points for more than a nibble of banana bread, or a sip of Coke, was deemed a lunch break. The pressure was unrelenting, although this wasn’t a one-sided exercise. The ‘hand of Piet’ helped me up a few climbs, including one that had us passing pro rider Cherise Willeit, who happened to be at our end of the race.

For the big Pezula descent into Knysna I was, once again, on the lead, before a final visit to the hurt box, as I clung desperately to Piet’s back wheel for the final six kilometres. We finished just a couple of minutes behind Jan (claims of him stopping along the route to take pictures have not been substantiated).

Despite feeling a little shell-shocked at the intensity of the morning’s riding, after a shower and lunch I had no difficulty with the five-hour drive back to Cape Town.

To borrow from the investment world, achieving perspective is all about the benchmark one chooses. Against our stated objective of a final training race for Cape Epic we did what we wanted to do.

The intensity with which we rode at times was outside my comfort zone – both physical and emotional – but that, too is part of the process of being 100% prepared for Cape Epic. 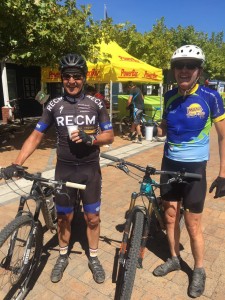 At the finish – somehow I’ve managed not to collapse after chasing The RECM Express for three days (pic: Amanda Bloch).

you must be super fit by now – reading your progress makes me tired…. no exhausted ….so good luck will be at the finish here in Paarl..

Slightly jealous at your 3-week-out peaking exercise, whereas we’ve had a couple off slightly too easy weekends now, in what may be an overly-long 5-week taper. Then again, from your report, perhaps I’m not!