Oscar Foulkes January 2, 2017 Cape Epic 2 comments
I’m tempted to make a (bad) pun about our meeting point for a couple of this week’s rides being Mon Petit Pain, because there was some pain involved. I can’t speak for Piet, though, because in addition to the same rides, he was also doing some big runs. By the end of it he could declare that not even his toughest week of Ironman training matched what Lezandré dished up last week.

I kicked off on Monday with a three-hour loop from City Bowl to Constantia Nek and back, mostly on the newly opened trails. On Tuesday we drove to Plettenberg Bay, which made it a rest day.

For Wednesday’s four-hour ride Lezandré suggested a double helping of the Harkerville Red Route, which we rode at a pace set by my heart rate. The idea was to stay below 140, but some of the steeper climbs pushed it to 150+. For the second loop, I let it stray a little higher, with the consequence that the second loop was faster than the first. We ended up riding for about three-and-a-quarter hours, so I suggested (not that forcefully, I’ll admit) that we do a little bit of Petrus-se-Brand to make up the time. Coffee and recovery eats at Mon Petit Pain was the winning suggestion.

Piet knocked out a half marathon (or close to it) on Thursday, while I kicked back on the couch. For Friday’s six-hour ride, we left Knysna via Simola Hill, and headed up the Uniondale road in search of Angie’s G-Spot. Apart from a few short descents, everything was on an uphill gradient, with several taxing climbs made tougher by temperatures that, in places, exceeded 39 degrees. Eventually, at the top of the Keurboomsrivier Game Trails, we turned around without having found the G-Spot (it seemed we just didn’t go deep enough into the mons, um mountains).


I headed back to Plett on the Wittedrift road, with Piet retracing our steps to Knysna. We parted with him cheerfully telling me that my return would be “all downhill”. How wrong he was – I didn’t reach the highest point on my ride back until I got to the 66km mark, by which time I had climbed 1540m. I ended up climbing more than 100m more than he did. The route was exposed (i.e. not shaded), with sections that were loose and rocky. The Coke and litre of water I bought at the shop in Wittedrift went down extremely well!

It was good to tick off 100km, but sobering to relate that to Attakwas, which we ride in three weeks’ time. That will involve an additional 20km in distance, and total climbing of around 2900m.

Both of us were relieved to just do a recovery spin on Saturday. I don’t know how Piet managed a 15km run in the afternoon, because I was pretty much glued to the couch.

Our programme had a four-hour ride on Sunday (i.e. New Year’s day), which we shifted to the afternoon. This wasn’t a great move; somehow it’s easier to tackle these things in the morning. Anyway, we rode up Phantom Pass, down the single track, and then up Simola Hill before messing around in the forest at the top of the ridge. At this point (around two hours) we’d had some quality riding, but were just about to run out of water. It was hot and sweaty, so we headed back to Knysna.

With the exception of the day following Friday’s marathon session, my body is feeling good. By the time we get to Epic, there won’t be rest days or recovery spins. My assumption (or is that hope?) is that the next 10 weeks of training will ensure that I can do this for eight consecutive days. 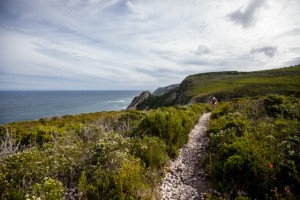 Hi Oscar! I’ve just read your entire Epic training blog and have found your story hugely inspiring – I’ve also just turned 50 and will be doing my first Epic in 2017 with very similar aims (and precious experience!)

I look forward to continuing to read your blog and meeting you in March!

Thank you, Ralph, see you on the trails!