Oscar Foulkes September 6, 2016 Cape Epic No comments
My Be My Epic Valentine post drew some amused comment, but just one serious interest. The Partner (I’ll call him that until he’s okay with being ‘outed’) more-or-less committed immediately, despite the fact that I could barely whisper, and was on the way to losing nearly 10kg during radiotherapy.

He, on the other hand, was already in training for the Two Oceans Ultra Marathon. This would be followed a few months later by a full Ironman, and for good measure, the Trans-Baviaans MTB. Even if I were at peak fitness, I’d struggle to remain within sight of him.

Thanks to a 13-week training programme from Lezandre at the Sports Science Institute, I was able to get strong and fit enough to complete the Imana Wild Ride. But three- or four-day stage races are known territory for me. The Cape Epic is ‘eight days of courage’.

Having completed Lezandre’s first 13 week programme, this week I started the Epic programme (see alongside). Shit just got real.

I had planned to ride with The Partner on Saturday. I woke up early, to a south-easter that was just about gale force, and a message from The Partner, suggesting that riding in the wind was not an option. Inside, I was cheering. I have been known to ride in winds as strong as this, but I didn’t want to be the one calling off the ride. The plan was adjusted to ride on the road the following day.

There is a little backstory to the road ride, because The Partner wanted to ride his new road bike. I should add that he doesn’t own just one or two bikes. In fact, the number goes beyond several. As he puts it, there is a precise mathematical formula for calculating the number of bikes he owns: S – 1, where S stands for the number of bikes that would cause him to be single. Fortunately, for him, S is a big number.


On Sunday, I needed to meet him at the Camps Bay police station at 7.00am. From my house this is a +-25 minute ride. I was delayed leaving, and despite riding in the red zone all the way, I arrived at 7.04 (or maybe 7.05). The Partner rightly waited a few minutes and then carried on. Next time I’ll be more punctual (let’s just say that if I ever decide to join the Swiss Cycling Club I’ll be well prepared).

Yesterday, before I’d even expended one minute in formal Epic training, I received an email from The Partner suggesting that I should ride the Attekwas with him on 21 January. This race is 120km, with 2900m of climbing, from Oudtshoorn to Groot Brak. It’s fantastic preparation for Epic. The only problem is that I need to be in Cape Town that evening. I’ve calculated that if I ride fast, and have someone drive me, I can get just about get back to Cape Town in time.

Over the course of the next six-and-a-half months there will be many other times when I’ll have to juggle commitments to fit Epic training into my schedule. For the vast majority of riders in the Cape Epic – in other words, for everyone other than the pro riders, for whom training is their job – just getting to the start line of the Epic is a major achievement.

However, like the Epic’s ‘eight days of courage’ that are experienced one turn of the crank at a time, my training programe involves one day of Lezandre’s instructions at a time. From my experience of doing the first 13 weeks, it’s amazing how this daily commitment makes training a manageable process.

Throughout all of it there’s a riding partner to keep one motivated (and punctual). 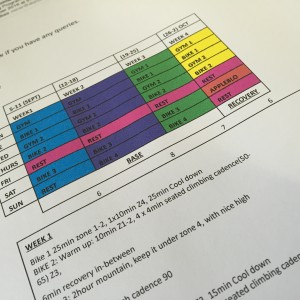