Oscar Foulkes March 23, 2018 Cape Epic No comments
When the 2018 Epic route was announced, there must have been widespread rejoice at the 39km of Stage Five. A chorus of “rest day!” was heard in coffee shops around the land (you know, the ones that have so many bikes parked against railings that access is nigh impossible).

Then reality started sinking in. Almost all the 1430m of climbing in the first 28km, with the final dose being delivered by way of the Seven Peaks trail. There’s a cut-off time of slightly over four hours. And don’t forget that it’s coming immediately after roughly 450km over four consecutive days.

Today dawned bright and clear. Neither cloud nor breeze made an appearance to mitigate the effects of late summer sun in the oven that is Wellington. The top riders set off in the relative coolth soon after sunrise. Our start time (9:58) ensured that we would finish at around 1:00, in the heat of the day.

All I did was walk to the start, and sweat was already pouring off me. Riders huddled in scant shade, desperate to remain cool for as long as possible.

We rolled off the start line, pedalling out of the race village at a sedate pace. The brief from Coach Erica was not to ride on heart rate, but rather on ‘feel’ (every day on Epic drops riders’ heart rates a little). The first little climb on tar was hard on the legs, and then we entered farmland. The climbs came thick and fast, with too-brief recovery flats and descents in between. We more-or-less stuck to the plan of keeping it conservative, but many of those ‘testers’ were so steep that effort was required to get up them. I was in too much discomfort to feel gratified that the effort was translating into passing teams that had started ahead of us.

I drained two bottles before we hit the water point at 20km. There was temporary respite, and then the climbing started all over again.

Seven Peaks may be one of the most depressing climbs in the Western Cape, because every time you round a corner, thinking that you’ve finally beaten this thing, you see riders on the hillside above. It’s relevant to point out that the chain of riders takes the form of a zig-zag reaching up the mountainside. You just know you’re in for a tough time.

Suffering eventually comes to an end. We reached the top, and then descended via Cool Runnings, eventually getting to the finish roughly three hours after starting.

We continued our pattern of gaining GC positions on every stage. We’re now halfway in the Grand Masters, but I can’t see us getting to halfway on the overall GC.

This week has flown, probably because of the length of stages one to four. Basically, our days have consisted of waking up early, eating breakfast, getting everything ready to start riding, and then riding until early afternoon. Thereafter, it’s a rush to hydrate and eat, drop bikes for wash and service, shower, followed by rest. By this time it’s supper, and bedtime is soon thereafter. Repeat for four days.

Tomorrow and Sunday are cooler days, which is a blessing, because Wellington and Paarl can get really hot. While both days are significantly shorter than stages one to four, we have 2000m of climbing on both days. Knowing how steep the mountains are around here makes me aware of the need to respect what awaits. 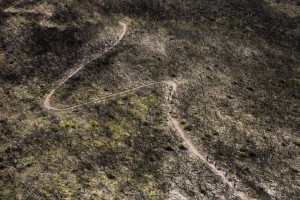 Just one of many climbs today (pic: Greg Beadle/Cape Epic)