Oscar Foulkes January 15, 2018 Cape Epic No comments
Erica sends me a month’s worth of training at a time, which is great, because I get a sense of what’s coming up. In the case of the dauntingly heavy load of base training rides between 23 December and 7 January, it helped to be able to mentally prepare myself for the task ahead. However, I hadn’t quite finished that block, when she sent out the next instalment, for the four weeks starting 8 January.

The first week of this new period was also the last week of my holiday. Therefore it was no coincidence that it kicked off with three big days, starting on the Tuesday. So, there was still work to be done on the current programme (i.e. the weekend’s two rides), with something of a monster coming my way the following week. And, it’s not as if I was starting the week fresh.

Tuesday’s 90km on the road was relatively straightforward. There was no halfway stop for a cheese toastie, and I may not have eaten more than one or two bars. I ended it feeling fresh, with the thought that perhaps my body was starting to get conditioned to this thing of being out on the road for long stretches.

Wednesday was another story, with the parameters being 120km on mountain bike, and a minimum of 1800m of climbing. From a previous ride, I knew that a big loop from Plett, via Wittedrif, up to to Buffelnek on the Uniondale road, and then back via Petrus-se-Brand, would be 100km. All I needed to do was add the Harkerville Red Route, and I’d have my 120km. The Red Route is a ride all by itself – admittedly for riders in holiday mode – and here I was casually adding it to make up the miles.

If there can be such a thing as a Queen Stage in a training programme, this was it. The total climbing ended up being closer to 2300m, and it took me just over seven hours to complete. I rode it unassisted, so food stops didn’t come at the ideal times.

I was solo, with music for company, and it seemed entirely appropriate to be listening to the Foo Fighters (loudly) as I entered the Petrus-se-Brand singletrack, with hell-for-leather pace in mind.

So, why is this an exciting piece of riding? For starters, one is flashing past trees, which accentuates the feeling of speed. Then there are varied gradients, including some fairly steep sections. The trail goes over many roots, including small drops. And, because I was riding it on the Tallboy, the terrain didn’t necessitate a change in speed. It’s basically a flat-out ride, with an occasional light touch on the brakes to moderate speed when going into a turn.


About half an hour later I realised that I’d forgotten to engage my front shocks before entering the singletrack (I’d locked them out when standing to climb an earlier hill), which meant that the impact of every one of the obstacles traversed by the front wheel travelled up my arms and through my body. Along with Taylor Hawkins’ Foo Fighters drumming, I was having an immersive percussion experience. Full credit to the Tallboy geometry for carrying me through it on rear suspension only, without me realising that fatigue had caused me to miss an important detail.

By the end of the ride, I was drained. In fact, I wasn’t sure that I’d be able to go out and ride 80km the following day. But, it was on the programme, so I had to do it. I tried a new route, entering Harkerville via the coastal path from Cairnbrogie. The initial pace was a relatively relaxed spin, which is a great way of getting rid of past days’ residual pain. After about 10km, my body was back in the game. Without planning it specifically, I reached the designated 80km just as I arrived home, four-and-three quarter hours later.

I had two welcome days off, followed by an easy hour-and-a-bit by way of R&R (recovery and recreation) on Sunday.

In Afrikaans, if you want to make a point of saying you’ve searched all over the house, you’d say: “Ek het die huis plat gesoek.” Similarly, if you’ve driven all around the country you’d say: “Ek het die land plat gery.” It’s a mystery to me how the word for ‘flat’ or ‘flatten’ came to be used to accentuate the extensiveness/intensity of an activity, but that is the expressive beauty of Afrikaans.

Having ridden close on 1300km in 12 base training rides over the course of three weeks, I could say: “Ek het die berge plat gery*.”

But that would be in a manner of speaking only, because the mountains are no flatter than they were before I started.

I’m doing a 120km mountain bike ride around Cape Town on Saturday (i.e. 20 January) if any other riders-in-training want to join.


Listen what happens when you do a direct translation of a simple hunting story. 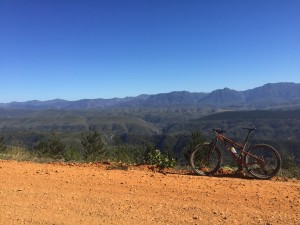 What a landscape to be riding through: the road between Wittedrif and Buffelsnek.