Oscar Foulkes March 20, 2018 Cape Epic No comments
The theme for our Cape Epic wine list last year was wines from the regions we rode through. This time, the name of the wine has to have the word ‘mountain’ or equivalent in other languages.

Piet is the resident playlist compiler, and assembled an Epic playlist along similar lines. Yes, Ain’t No Mountain High Enough does feature. You get the picture.

So this morning, when I was still motivating myself to get a cup of coffee together, the first lyrics that came out of the speakers were “Nobody feels any pain.” I laughed loudly (laughter at any point on an Epic day is a good thing), thinking that this was Piet’s occasionally off-beat sense of humour making an appearance. It turned out that this wasn’t on the playlist, and we quickly switched over to some banging Foo Fighters and Green Day. Our camper van is not a rock-free zone.

Even if it was inadvertent, there is a message in this. Everyone in the field feels pain, from the leaders to the Hyenas following the stragglers. The point is what one does with the pain. Barring crashes or technicals, getting to the finish requires the ability to overcome pain’s insistence that this activity ends immediately.


Today was a classic Cape Epic stage. It was long and hard, without any ‘free’ kilometres (i.e. the ones on the descent from big climbs). I felt as if I spent the day just grinding away. At about 75km I thought I could allow myself a small feeling of levity. Piet thought so too, posing the question: “How hard can 30km be?” He did the same to a fellow rider with 25km to go.

And then the route planners showed us, in no uncertain terms, just how much extra pain they can throw at Epic riders. For the record, Piet is banned from asking any such questions for the remainder of the week, no matter how rhetorical the intention.

There is a simple bit of science to the effort expended in endurance events, which is that one gets nearer to the finish with every pedal stroke. There was nothing pretty about our performance today. Nor did we have the moments of fun we had on Stage One. So, it was a surprise to find that we’d advanced a few positions in our category (Grand Masters).

We have two more big days to get through before we can feel that we’ve got over the hump, but first there is the small matter of a few glasses of Hartenberg Gravel Hill Shiraz tonight. There are plenty of mountain references there! 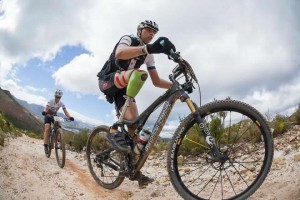 Reuben van Niekerk has completed four Cape Epics on a prosthetic leg. We briefly caught up to him in the Bosvark section, while Bob Dylan’s lyrics were on repeat in my head. What an inspiration he is!