Oscar Foulkes November 27, 2017 Cape Epic No comments
My reason for writing a weekly training report is to record the individual steps that get riders to – and through – the Absa Cape Epic. While much of the training will apply to many riders, this is obviously from a personal perspective. Some of the journey is physical, but much of it is mental or emotional. In fact, there’s no question that when the going gets tough, Epic is more about mind than matter.

I was upbeat at the end of last week’s training, thanks to riding some great trails over the weekend in the company of other Epic riders. What I’m getting at is that the most recent step in the journey didn’t feel like a big stride towards the Epic goal. It was more slump than jump, more creep than leap.

Off-the-bike stresses made a reappearance this week, sapping energy and generally clouding my mood. As far as training was concerned, I lost Tuesday’s recovery ride to rain (not a bad trade-off given the drought). Thursday’s ride was also supposed to be a recovery ride, which I was going to do as a spin to Franschhoek from Pearl Valley.

On a whim, I decided to instead follow a jeep track up the mountainside across the road from Pearl Valley. It’s gnarly climb that is ridden fairly frequently by the locals, and was a happy discovery for me. While it’s close to densely populated areas, one quickly gets the sense of being alone in nature.

Saturday was the Coronation Double Century, for which I’d been invited to join Piet’s RECM team. Cycling for six or seven hours is a standard part of the Cape Epic experience. A 200km road race, however, was a new frontier for me, but my training programme has had several road rides in the vicinity of 100km. One of these was with the bulk of the RECM team, and I’d more-or-less held my own.

Within the first few kilometres I could feel that I was outside my comfort zone. I was getting pushes from about 20km, and by the time we got to 60km I told them to carry on without me. I wasn’t feeling good; whether this was from riding at too fast a pace to start, or it being an ‘off’ day, I don’t know, but it was depressing to not be up to completing the race with the team.

Up to that point, my heart rate had averaged comfortably in excess of 150 bpm. There was no way I could have continued at that intensity.

A call was made to our support crew to collect me. My brain must have been affected as well, because instead of either waiting where I was, or riding back the way we came, I carried on for another 30km before I was picked up. At the team fines meeting that night, I was severely punished for causing the person to drive 90km instead of 30km to pick me up.

I had a good sleep in the afternoon, and another nap on Sunday, so perhaps something was amiss with my body.

One bit of amusement on the route was about 40km in, when we were passed by a team that had “04:55” emblazoned on their tops. Given that we were aiming for 6-ish hours, they were going a lot faster. That didn’t stop Piet, who is an inveterate wheel chaser. Before we knew it, he was in the middle of their peloton. We managed to call him back before he disappeared out of earshot.

My programme had a three-hour ride for Sunday morning, which I thought I would do as a spin from Swellendam to my mother in Ashton. However, it was raining, and in any case, I couldn’t possibly let my teammates see me head out for a longish ride the day after bailing on them in the DC.

With 16 weeks remaining, a week of less than five hours on the bike may not obviously seem like a positive step towards Epic. While it may have been a somewhat wobbly step, it was one nonetheless. Like all the others, it needs to be recorded. 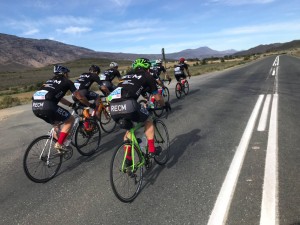 Our DC team while it was still whole, with Piet at the head of affairs (Pic: Richard McMaster)