Oscar Foulkes March 17, 2014 Uncategorized No comments
Twitter sometimes gets accused of being nothing more than gossip. I think chatter is a fairer descriptive, but that line of thinking obscures the huge value that does get delivered by the service.

SXSW introduced me to two great practical applications for Twitter. Firstly, it enabled the posing of questions from the audience, no matter how large. It was a brilliantly efficient way of doing it, especially because it forced the question posers to get to the point. And we didn’t have to wait for them to stand and waffle their way through the question. A major benefit to the organisers is that they could choose the best questions.


The second benefit was crowd-sourced notes during workshops (all presentations, actually). Every session had a designated hash tag. Instead of writing down notes (or, in addition to notes), participants tweeted key points with the hash tag.

During one workshop I was sitting next to someone who was typing up notes on her MacBook Air. She was simultaneously following the Twitter feed for the hash tag, so that she could copy across important points she may not have picked up on first time round. People were also using their smartphones to photograph the presentation slides, which were also tweeted.

But then this was SXSW Interactive. What else would you expect? 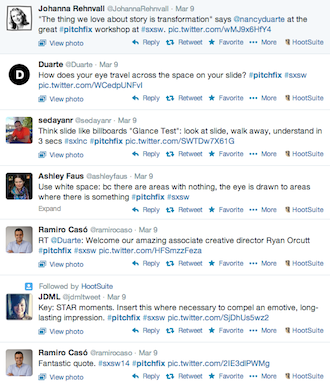