Bidding to be Ultimate Braai Master

There’s a theory that the Neanderthals died out because their failure to discover cooked food ultimately led to malnutrition. One would assume that food was first cooked over coals or flames, which means that every time we haul out our Webers we are commemorating the extinction of humanoids who never learnt to braai.

While much of what happens around the stereotypical Sunday braai may appear to be somewhat uncivilised, there is something primally satisfying about using this most basic of cooking methods, even if only to grill some sausage (which for many Europeans is as adventurous as barbecues get). Perhaps this is the reason why braai is seen as being inherently unsophisticated. Nourishment without the finesse or artistry we demand of cuisine.

Cooking is about using the best of ingredients, sympathetically seasoned, and prepared with the appropriate degree and type of heat. Not all foods are suitable for braai, but in many cases the results of cooking over coals are unrivalled. Beyond this, it’s excellent whenever one is lacking kitchen space.

However lyrical one may get about cooking on coals, though, it’s just another heat source, albeit one requiring more ‘feel’ to manage than a convection oven or gas hob. 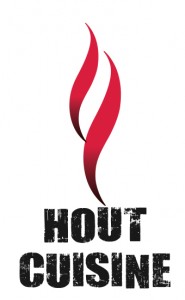 The logo that Nic Jooste knocked together for us

Last weekend I took part in the Cape Town auditions for the Ultimate Braai Master reality show and competition. My ‘braai buddy’ for the competition is my brother, Christopher, and our team is called Hout Cuisine (for those of you who don’t understand Afrikaans, ‘hout’ is wood).

The format of the show is a series of 13 challenges that are spread across 52 days, during which the teams will cover 8000km by road. Justin Bonello, who presents the show, will certainly be including his favourite parts of southern Africa in the route. There is no doubt that he will also be fiendish in the challenges he sets. 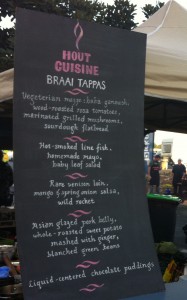 Our menu for the Ultimate Braai Master auditions (yes, I know there's only supposed to be one 'P' in tapas).

At the heart of this challenge is an examination of what braai really means to South Africans. It is, after all, held up as an important part of our heritage, and one of few which is common to South Africans in a politically neutral way. The food that our little team presented was completely different to what other teams had done, as you can see from the image below (for fear of accusations of immodesty I won’t repeat what the judges said to us).

So, what is it that makes braai special, even if the meat is burnt? I think it all comes down to the circumstances under which we braai. Basically, braai is done during downtime. We’re relaxing, we’re being sociable, and the whole thing is bound to be very informal.

The other common feature is that men take control of the tongs, which brings with it enough psychology to fill a doctoral thesis. Ultimate Braai Master will decide – once and for all – who really does know his way around a grill. Boys will be boys.

Follow up: I can report that team Hout Cuisine has been selected as one of the 15 teams that will take part in the reality TV show and competition. You can follow us on Facebook.

Aaah, I can still taste those liquid centred choc puddings from the World Braai Champs (or SA braai-off thereof) at Century City many years ago. You’ll have won the judges’ taste buds and scoring sheets on those alone!

Thrilled to hear you have made it so far. My son, Ian, is busy editing the tv clips filmed to date, so I will tell him to try and give you some good coverage. Which side are you most photogenic?

The more important issue to managing to record any sound coming out of my mouth!