Oscar Foulkes August 2, 2014 Uncategorized No comments
Gerry McIlroy, father of the 2014 Open Championship winner, Rory, is looking like a smart bettor. Ten years ago, when his son was just 15, he took a bet that Rory would win the Open before he turned 26.

Rory was already a prodigy on the golf course, so much so that Gerry worked two jobs to fund his son’s amateur golfing. Barring injury, it was very likely that he would get at least one start in the Open. Let’s say that the odds of him competing at least once would have been around 5-1, perhaps shorter.

An outsider in the Open would be priced at something like 200-1. At the age of 15, he could therefore have been priced at 1000-1 for an Open victory before his 26th birthday (the two odds multiplied). On this basis, Ladbrokes’ 500-1 isn’t exactly generous.

On the other hand, if you take the view that if he’s good enough to get to the Open he’ll do it by the time he’s 20 (top golfers tend to be quite precocious these days). And, if he’s good enough to compete once he’ll manage a few attempts. In that case, the 1000-1 would need to be divided by the number of times he starts. By this reasoning 500-1 looks generous.


Rory played his first Open at the age of 18, which put Gerry on the right side of the value assessment.

Reports indicate that it is not unusual for bookmakers to get approached for similar bets. Amongst others, Ladbrokes laid bets – when Lewis Hamilton was just nine – that he would win an F1 race or would win the F1 championship.

When these bets pay out, the sums are generally large. In order for bookmakers to remain solvent, they need a steady stream of optimistic parents hoping to turn a couple of hundred into hundreds of thousands.

The publicity around Gerry McIlroy’s payday has a monetary value to Ladbrokes far greater than the payout. If nothing else, it will lure hopeful parents into similar bets.

Speaking as a parent, the money is a sideshow. I get emotional just watching my kids at school prize giving ceremonies. Ladbrokes would have been the last thing on his mind when Gerry saw Rory hoist the Claret Jug! 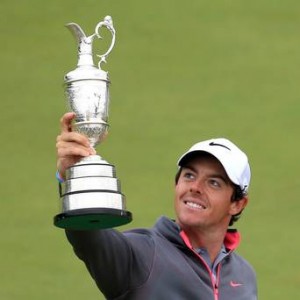