A Royal Feast of Racing 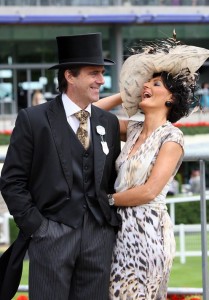 It’s not yet over, but I have been utterly captivated by Royal Ascot this week. You could certainly say that it’s been a hugely pleasurable experience (which is what this blog is all about).

During the course of last year, frustration about the generally crap state of horse racing in South Africa amidst a cloud of apparent inaction and apathy led me to jot down a few thoughts on positive steps that could be taken (read them on Sporting Post here).

I’ve been watching the action at Ascot on telly, so I can’t comment on the on-course experience. However, the quality of the broadcast has been excellent. The visuals have been great throughout. Horse racing has plenty of eye candy, from horses to people, who in the case of Royal Ascot have to abide by a strict dress code, which adds to the spectacle.

What really sets the broadcast apart is the degree of knowledge and general interest factor imparted by the presenters. They know what they’re talking about and they make it their business to draw viewers into the drama of the contest. They do get technical when they need to, but it is done in a way that enriches both experience and understanding.

I am going to be accused, I suspect, of being a little disingenuous, because when Frankel steps onto a racecourse, as he did at Ascot on Tuesday, nothing else really matters. I doubt there’s a superlative that hasn’t been applied to him; without being guilty of hyperbole I can say that it’s probably all true.

At the end of his three-year-old career I did a little post about Frankel (here). He won his 2012 season-opener easily enough. What he did on Tuesday, to record his eleventh win, from as many starts, was to completely crush his opposition. I have seen horses win races by 10, 15 or 20 lengths. What one hardly ever sees is that kind of dominance in a Group One race, when the opposition comprises really good horses.

Frankel’s 11-length romp equates to 22 lbs (over 1600m each length of a horse is equivalent to 2 lbs). In other words, if a handicapper wanted a dead-heat, Frankel would carry 22 lbs more than the horse who came second. That’s not much shy of two stone, and even a stone (14 lbs) is a huge differential.

OK, so what else has been good? I’m of the view that bookmakers damage horse racing. Racing constituencies that operate on the basis of a tote monopoly are in better financial health than ones that have a mixture of bookmakers and tote. Having said that, British bookmaking firm William Hill sells bets with far more nous and creativity than any tote I’ve encountered. Creating and making sales offers has formed a huge chunk of my work life, so while it would be stretch for me to call myself an expert, I reckon I can spot the good from the bad.

A couple of months ago I downloaded the Racing Post iPhone app by way of some research into horse racing apps. It wasn’t my initial intention, but with William Hill offering a £25 free bet for sign-ups via the app, how could I refuse? They’re also proactive in occasionally offering app-only free bets if your selection finishes second to the hot favourite in a particular race.

The real point of Racing Post, though, is the quality of the comment. In a free app I can’t expect to get all the detail of the race form, but they give a useful summary of each runner’s chances, along with the all-important RPR (Racing Post Rating), which drives their predictor (see below). This is never going to be right all the time, but it does indicate which horses are best off at the weights. 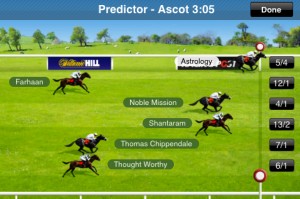 Racing Post's Predictor for today's King Edward VII Stakes. Astrology is rated 7 lbs superior to Noble Mission and Shantaram, which should see him home by more than a length, but the softness of the ground could have an impact, and these are all young, improving horses.

By using a combination of BBC coverage and the free Racing Post app, I’ve managed to keep my (small) bets this week fun and profitable, mainly by finding horses at 6-1 and better for each-way bets (Joviality, who took the Windsor Forest Stakes at 11-1 was the best example). It helps, of course, that top horses in top races generally run to their form.

My each-way on Opinion Poll in the card-heading Ascot Gold Cup yesterday almost ended famously. He finished second to Colour Vision (so, the place part of the each-way paid out). However, he had been bumped by the winner twice in the final furlong, which resulted in an inquiry. I was amazed that the television cameras followed the jockeys into the inquiry room. This kind of transparency is way overdue in horse racing.

Of course, the week isn’t yet over. Tomorrow we’ll see Black Caviar, the Australian mare unbeaten from 21 starts, in action in the Diamond Jubilee Stakes. All her wins have been on home soil, so she tackles properly international competition for the first time.

It has been an extraordinary week of horse racing, in so many different respects. The sport needs more of this.

(To be read in conjunction with the following post).