A new view of mountain biking, thanks to Wines2Whales 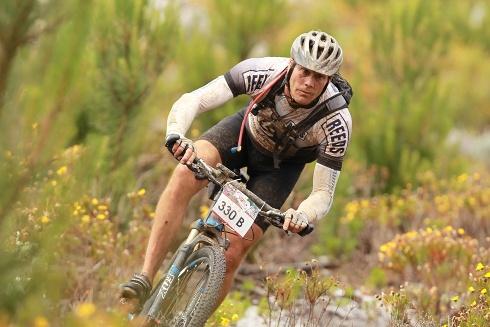 It should trouble me, when pulling on my cycling shorts, that Lycra is the primary component in a lot of women’s underwear. Even if it did, it appears not to bother the thousands of other 40-something men I see at various mountain biking events, or doing training rides on Table Mountain.

I did my first-ever mountain biking stage race over the weekend, in the form of the hugely popular Wines2Whales, which traverses 213 bad-ass kilometres between Lourensford wine estate (Somerset West) and Onrus (near Hermanus) over three days. Lycra, once again, made a bold showing (a friend has pointed out that her husband’s bib-type cycling shorts cost more than her wedding dress did 17 years ago).

In my jocular, pre-race mood, I opined that mountain biking is the new mid-life crisis. As mid-life crises go, this one is rather benign, in that it doesn’t involve extra-marital affairs, or other such sordid stuff. Indeed, a fit 45-year-old has a better chance of being a healthy 65-year-old than his overweight couch-potato equivalent (barring, of course, the ever-present danger of a fall that results in a broken shoulder or collar bone).

Mountain biking is also about toys, expensive ones. The latest carbon-fibre frame is not a prerequisite, but there is something more than a little ridiculous about a man 10kg overweight spending a fortune on bicycle components to save 500g in weight.

The ride itself is no joking matter, covering large distances off-road, with its many single-track sections adding to the uphill workload. Much of the downhill single-track is technical, some of it to the point of mild fear (not the same degree of fear for all riders, admittedly). The route traverses some of the Western Cape’s most beautiful landscapes, much of it covered in Fynbos. It is nothing short of spectacular.

One of the features of day one is the portage section up the old ox wagon trail on the Gantouw Pass, where the wheels centuries ago left deep ruts in the rock. It’s hard enough carrying a bicycle up, I couldn’t even begin to imagine dragging ox-wagons up the steep trail. Awe-inspiring stuff.

The highlight of day two is the abundance of exhilarating single-track on Oak Valley, with another long single-track descent through the Lebanon forest. We were star-struck at the end of all that. 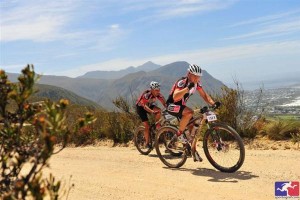 The top of the last hill on day three, with Hermanus in the background

Day three was fast to begin, as we made our way from Grabouw to Bot River, which is mostly downhill. I made an unscheduled dismount from my bike on a very steep switchback above Houwhoek Inn, for which I blame the spectators sitting on that corner, who were calling to me to be careful. The videographer who was positioned there for exactly this reason could have some entertaining footage of me hitting the ground running, as I went over the handlebars!

The rest of day three, a long climb to the top of Hemel-en-Aarde Valley, before a final climb above Hamilton Russel, was long and hot. And, as we approached the last few kilometres, there was a fast single-track section alongside a river. It felt was if the day’s route had been crafted with all the drama of a blockbuster movie. And then, in a final twist to the tale, my bike had a bad puncture with less than a kilometre to go (although this wasn’t as bad a breakdown as the guy we’d just passed with a broken chain).

Like many other stage races, Wines2Whales is ridden in teams of two. I’d ridden once with my partner, for an hour nine months ago, which is the only time I’d ever met him. Both of us took a risk, because there’s nothing worse than riding with someone who is either a lot stronger, or to whom one has taken a dislike, but it worked out very well (please, no comments about us both having sore bums).

I couldn’t say that I felt like a sprightly teenager the following day. It’s not only one’s legs that feel it; mountain biking taxes the entire body.

Yes, there are elements of Rudyard Kipling’s If about the experience:

If you can force your heart and nerve and sinew
To serve your turn long after they are gone,
And so hold on when there is nothing in you
Except the Will which says to them: “Hold on!”

Regardless of age, Lycra, or expensive bicycles, at some point the unyielding terrain brings you face to face with your “Will”. Around you, mates are sucking up the same pain. You’re doing all this in picture postcard landscapes. And, of course, there’s the downhill single-track, which is mostly flat-out fun, but which also has its moments of ‘fear factor’. You can’t fail to feel great having faced your vertigo demons, and seen them off.

The whole thing, from start to finish – especially finishing – is extraordinary. I may have started the experience with some irreverent views of 40-something-year-old mountain bikers, but ended it knowing why so many people take part year after year. I’ll be back!

An interesting aside: The two classes of my son’s grade at school comprise 50 boys. Fathers of six of these boys took part in Wines2Whales, which is a remarkable percentage.