A Failed Attempt at Revenge 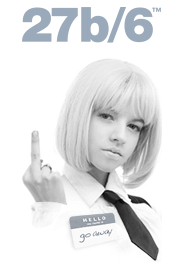 Given the funereal mood that has descended upon South Africa since our loss to Australia in yesterday’s quarterfinal Rugby World Cup match, it may seem inappropriate to praise an Australian for anything.

Actually, in this case it was a Kiwi, in the form of “criminally incompetent” referee Bryce Lawrence, who was the main villain. Lawrence’s sin (committed many times over) was one of omission – who knows, perhaps it was by commission – in that he declined to penalise the Australians for numerous infringements at the breakdown.

The praiseworthy Australian I had in mind is David Thorne, famous for his Missy the Cat posters and drawings of a seven-legged spider in lieu of moneys owed. You can read the full archive on his website.

In his various email exchanges, Thorne draws his victims into a spiralling exchange that never fails to amuse. In fairness, some of these are used as retribution for times when he has been the victim, and is getting back at someone who has wronged him.

So, last week I had cause to vent (on Twitter) at Nedbank over an additional charge that I was expecting to be levied. The communication was then moved onto email, but it didn’t really go anywhere. Firstly, the person on the other side was confused because the charge had never actually gone through. I was feeling aggrieved at the expectation of the charge, as well as their failure to use two of the world’s most powerful words: “We’re sorry”.

Inspired by David Thorne, I then sent a longish email in reply, which elicited a professional response that very nicely put me in my place – and didn’t even get close to spiralling the exchange.

I would have to declare the score on this exchange Nedbank 1 – Oscar 0.

David Thorne scraps with individuals or small companies. If he has attempted to draw large corporates into his exchanges they appear to have kept it uber-professional (like Nedbank did here). I suspect he also succeeds because – like Australia’s open-side flanker, David Pocock – he is quite happy to scrap for the ball in contravention of rules. Thorne has a way of getting up his protagonists’ noses, to the point where the exchange becomes really funny for us readers.

A few weeks ago, Whackhead Simpson prank-called the FNB call centre, turning their employee Sherwyn into a company hero. Reportedly, he’d had several other call centres hang up on his attempts. His exchange with Sherwyn was marketing gold for FNB, in the way it brought the sincerity of the bank’s “How can we help you?” to life.

I have made people angry, although I hasten to add that this has always been unintentional. I have no internal difficulty writing something with the intention of inducing emotional responses (e.g. laughter or tears), and regularly write material that is aimed at getting people to buy stuff. But I’m far too polite to intentionally get people’s hackles up to the point where they start losing their composure.

In the case of Bryce Lawrence, though, I think I can make an exception.