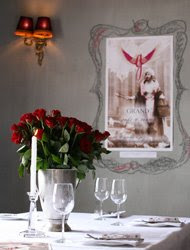 It will be interesting to see how the recession plays out in the immediate future of design. My guess is that frugality – perhaps not as austere as that espoused by my grandmother, who lived through not only the Great Depression, but also the Second World War – will trump ostentation. Even for those who can still afford it, my sense is that there’s a reluctance to be seen to be too flash.

Similar whimsy is in evidence at The Grand in Camps Bay (021-4384253, http://www.thegrand.co.za/). This building is certainly more grand, and benefits from being on the beachfront. The interior is also a skilful combination of dressed down (bare tinted cement floors) and Bohemian. It’s all really, really clever – nothing matches, everything looks as if it was collected from junk shops, and where an ornament or design feature is missing they’ve just used crayons to draw it onto the wall.

A few years ago I booked the honeymoon suite at The Grand in Plettenberg Bay for an anniversary celebration (I can’t remember which, and seeing as we’ve now been married for more than 14 years, I’m sure I can be forgiven that transgression). The outside of the building must have been damn awful drab post-war stuff (an influence of economy on design?), but a good paint job, the addition of some stylish (quirky) features, as well as the removal of the most offending design disasters, redeemed it. Once inside, the exterior, as well as location on the main shopping street, are irrelevant, because the views over the ocean are magnificent.

The honeymoon suite comprises two normal sized rooms, with Juliet balconies and French doors. The bath is positioned right beside one of these, so that one can take in the view while bathing. Due to the location on the hillside there’s no need to close the curtains. And, despite the bare, tinted cement floors there is no feeling of coldness; rather a wonderful sense of nostalgic opulence.

It does make me wonder if irony-spiced whimsy and nostalgia could become a popular design trend as a result of the need to scale back and recycle.

I do hope, though, that we’ll see more of the kind of food that The Grand is offering. I cannot bear the majority of the nonsensical food-as-art ego-driven crap that far too many chefs are putting onto plates. What they seem to have forgotten is that someone needs to not only eat the stuff, but also enjoy what they’re eating. Give me great ingredients, well prepared, any day.

Yes, there are chefs doing great cutting-edge food that’s also delicious to eat, but there’s just far too much wannabe stuff that does nothing but cause irritation.

The food we ate had no frills, and probably qualifies as being old-fashioned, but it was truly delicious. The mussels were fresh, cooked for the optimal time, and in a tasty broth that had garlic, white wine, herbs, lemon juice and cherry tomatoes. I have been in search of the kind of pan-fried calamari served at The Grand for years. Everywhere else I have been disappointed, but this was fantastic. In fact, everything on the table was brilliant – the creamed spinach, the ox tail, the tagliata, and even the fries. Absolutely no kitchen ego was in evidence. This was all about great food that was just delicious.

Our waiter had all the hustle of a Cape Flats gangster, but he wasn’t just entertaining; he also delivered great service.

I don’t mean to trivialise the pain and hardship being experienced by many people as a result of the recession, but perhaps a greater sense of reality will result in more wholesome product offerings. I can see escapism being a big feature (for instance, I think there’s a bright future for great comedy). The Grand may well be an escapist experience, but it’s remarkably well-grounded in the important details.