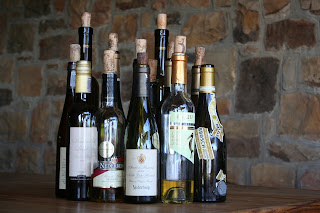 When the other new mothers lying in hospital at the same time as Andrea were getting gold jewellery, she was instead presented with a bottle of 1990 Chateau Suduiraut. Anyone reading this may well be surprised that I lived to tell the tale; shouldn’t it have been an Yquem instead?

That is a good point, which I’ll clearly need to remedy. However, I’m not much of a ‘label’ drinker, and I suspect that ‘label’ plays a disproportionate part in the price one pays for a bottle of Yquem.

I’ve always thought that South African botrytis wines (Noble Late Harvest) are amazing value, especially when measured against sugary, sulphury Sauternes. Admittedly, they’re not all that way, but it’s criminal that they’re allowed to bottle such crud and call it Barsac or Sauternes.

However, for all our love of stickies (the ‘our’ here refers to Andrea and myself – she wasn’t only given the golden wine because I like it), we seldom get around to drinking it. Apart from our own purchases, our wine fridge has an amazing knack for collecting dessert wines. So, last week we convened a group of 10 (we only had one half-bottle of several of the wines) to work our way through the collected stock.

This only served to increase the extent of the tasting, because several friends brought along extras. Oi Vey!

We had to keep our palates refreshed, so the table was stocked with duck liver parfait and pets de nonnes (nun’s farts). It was tough work, but we managed to get through it without any serious mishap.

Picking a wine of the night may well be unfair when you’re faced with that much deliciousness, and we dissed a few wines that under different circumstances we’d have enjoyed. However, the Mulderbosch had amazing acidity to balance the sugar and concentrated flavour (in fact, we were surprised to hear that the residual sugar was as high as 140 grams per litre). Joostenberg (as always) was delicious.

The line-up of Nederburg wines was interesting, in that oak is not used to the same extent (or at all) as the other wines. Some of them would have gained complexity by being fermented in barrel, whereas the oaking of the Kanu had perhaps been overdone.

Despite our best efforts there was, however, some wine left in each of the bottles, which I tossed into a pot a few days later and reduced. I can’t say I have a specific plan for it right now, but I’m sure that noble late harvest syrup will be useful.