Of lockdown, models and risks

Oscar Foulkes March 31, 2020 Uncategorized No comments
In years – probably decades to come – the Covid-19 pandemic will be the subject of case studies in many different disciplines. This thing is of interest to everybody from epidemiologists to political scientists, psychologists, behavioural scientists and more.

One of the factors that has intrigued me (in real time) is the data. I don’t know if any occasion in world history has been tracked – or forecast – with as many data points. Plus, the guys crunching the numbers are active on Twitter, so we literally have ringside seats, even though we are stuck in lockdown.

Before I go further, I’m not making any statements about this ‘just being the flu’. It’s highly contagious, there is no vaccine, and people die.

Experts have produced a variety of models, which portray a number of scenarios involving varying numbers of dead people. So much of this has been published that the exponential curve has its own memes. Governments have implemented – or not – the recommendations. In fact, so many different strategies are in play that we could almost argue that it could be construed as a randomised trial.

As an aside, this has also been a learning opportunity for maths teachers to use the basic numbers relating to the virus and its spread as the basis for showing that maths isn’t necessarily as difficult or obtuse as it is accused of being.

On 14 March, the Washington Post published this visual representation of the spread of Covid-19. I can’t believe it’s a little over two weeks ago. So much has happened!

There was also the Imperial College report on the modelling they did (click here for more).

And, of course, the application of maths depends upon the degree to which the data representing each population are the equivalent. Infection rates are going appear to be higher in a country that has high testing rates. Deon Gouws has unpacked a bunch of these factors here.

So far, so good. Whichever way we look at it, there is some kind of steep infection curve we’re all going to be on. Whether it ends up being fully exponential is unknown. In fact, evidence from countries that got it first is that preventative measures do result in the curve flattening. The USA also had early cases, but did nothing. What plays out there will be interesting as a comparison to countries that took more proactive measures earlier (with apologies for appearing to be callous to the human suffering and hardship that will accompany the infections.)

Even Italy, with its high death rate, has over the past few days consistently shown a daily decrease in new cases.

One of the implications of going into lockdown is that the authorities have given equal weight to the risk posed by any individual or community. This is clearly not the case. For the first few weeks of the outbreak in South Africa, the greatest risk lay with the people who travelled internationally, and their immediate circles. Furthermore, the people they interacted with did not have same mortality risk, because of different co-morbidity factors.

The pandemic is producing data on a daily basis. One piece of data that I found interesting was a report early today that a Maryland nursing home has 77 infected residents, out of a total of 95. These people, presumably, are high risk, and the virus should have been kept out at all costs. However, under normal circumstances, the residents don’t have the same potential for infecting others on a mass scale because they are generally stuck in the nursing home. This is not the same as the group of people from one party in Westport, Connecticut that led to dozens of immediate infections, which then ‘went viral’ (read more here).

Another bit of data I found interesting was the similarity in dates between India’s first infection, and that of New York. However, what happened thereafter is massively different, and not just because of different rates of testing. New York must have been affected by waves of arrivals of infected people (presumably living in close proximity), whereas India’s growth may have been organic only. So, the two regions did not represent a similar risk profile.

Under lockdown conditions, large numbers of South Africans run the risk of starving to death. Or, even if they don’t die, they will suffer extreme hardship. Funding for lockdown-alleviation programmes had to come from private funders. Our government is as broke as the population it governs.

Maybe there’s a case to be made for a smarter approach than shutting down everything for an indefinite time. For example, Germans who have recovered from Covid-19 can resume normal activities.

I should declare my love of numbers. In another life I might have followed a path that led me in the general direction of Nate Silver’s career (I’m bit of a fanboy). My attitudes to risk are partially formed by my involvement in horse racing. For example, if there are 16 horses in a race, they don’t all have the same chance of winning. And, in fact, if a top horse is offered at even money it’s likely that he would win that race more than 50% of the time. This is not the same as the red-black choice in Roulette.

Using the example of a permutation-based bet, like the Pick Six, a savvy punter might include the entire field (i.e. all the runners) in some legs, but have a banker in another leg. Taking the entire field is the equivalent of lockdown – it costs the most, but there are no gaps.

Regular handwashing, with associated care actions, might be regarded as the single-action strategy one would call the ‘banker’. If everyone washes their hands regularly and sanitises the surfaces they touch, and if infected people wear masks, almost everyone will remain disease-free.

The only way to be 100% certain of winning the Pick Six is to include the field all the way through. However, the cost will be prohibitive, and only in very few cases would the payout recover the cost of taking the bet. Blanket lockdown is looking a bit like this, except that the living conditions of the majority of our population probably mitigates some of the benefits of lockdown. So, it’s not really as risk-free as it’s pitched.

All risk events have a cost and a pay-off, and the ratio between them should approximate the frequency with which the event is likely to happen. My digression into horse races is less trite than it seems.

It’s possible that our lockdown is going to be extended. Or, even if it isn’t extended, some form of preventative measures will be necessary.

We went into lockdown largely on the basis of scenarios presented by Imperial College. They had to make assumptions in setting up their models. However, we now have more data at our disposal. The spread of Covid-19 isn’t the epidemiological equivalent of plug ‘n play. We’re starting to see many layers of nuance.

Consequently, I would argue that some kind of weighted approach is necessary, in the interventions that are applied.

I wouldn’t rush to a rock concert just yet, but there must surely be a way of safely restarting parts of the economy on 17 April? 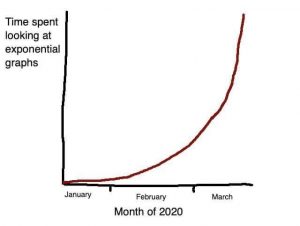